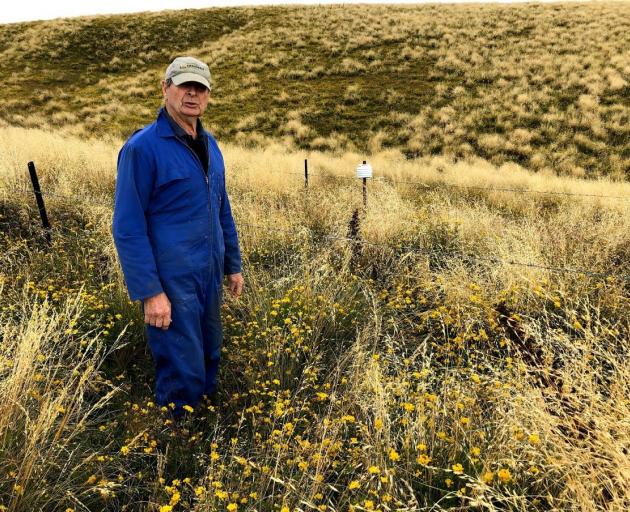 Avenel Station’s Pat Garden (pictured) and son Nick oversowed a 500ha area with Maku lotus seed in 2014. AgResearch then set up a trial within the block to look at the legume’s management, viability and sustainability as part of the ‘‘Legumes for Hard Hill Country’’ trial. PHOTO: SUPPLIED
When the Garden family at Avenel Station say Lotus pedunculatus or Lotus uliginosus, they are not casting Harry Potter spells.

They are talking about the legume, Maku lotus (Lotus uliginosus)

It is a variety of trefoil that has been trialled on a 500ha block on their high country property since 2014.

Pat Garden and his brother Eion had sown lotus on the property in the 1980s.

They oversowed 500ha and then AgResearch set up the trial within the block.

In addition to Avenel, five other high country properties in the North Island and another three, including the Macdougall family’s Minzion Station next door, are taking part in the trial.

Each property is trialling different clovers and other legumes and Minzion Station is looking at arrowleaf clover.

The 2200ha high country Avenal Station above Millers Flat, is farmed by the third generation of Gardens; Austin and wife Victoria along with Austin’s cousin Nick and his wife Amy, after their Austin and Nick’s respective parents Eion and Noeline, and Pat and Marcell, stepped back from day-today operations.

Pat Garden said one of the first issues was the limited availability of lotus seed in the country, as there had been little demand for it in 2014.

"I bought up all the lotus seed in New Zealand at the time," Mr Garden said.

The pelletised seed was sown by helicopter.

"As we had grown it in the 1980s we knew it would grow in our particular conditions because we are high altitude with very acidic soil of 4.7pH and very high aluminium toxicity."

What they did not know was how it productive it was, what the livestock performance would be, how it would fit into their farming system or if it would be sustainable or viable.

They did know that the management of the cultivar was critical.

Results of the trial and answers to questions will revealed at the BLNZ Central Otago Farming for Profit field day at the Avenel woolshed on February 17, from 1pm. People needed to register on the website.

There will also be a visit to the trial block site, weather permitting.