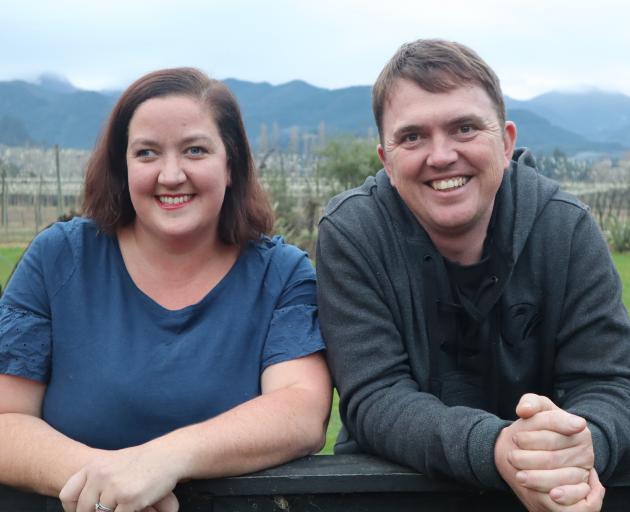 That, as West Coast dairy farmer Siobhan O’Malley succinctly puts it, is their job. And, in the case of "Meat the Need", the charity she co-founded, farmers are helping feed those particularly in need.

Last month, Mrs O’Malley and Golden Bay dairy farmer Wayne Langford received the industry champion award at the Primary Industries New Zealand Awards for Meat the Need, which kicked off during the first week of the Covid-19 lockdown.

Originally focused on supplying meat to City Missions and foodbanks, Meat the Need receives meat given by farmers, which is then processed and packed by Silver Fern Farms and delivered.

Mrs O’Malley and Mr Langford were in Dunedin last week, where they visited Silver Fern Farms’ headquarters for the first time, communication previously being limited to the likes of Zoom communication due to Covid-19 restrictions.

It was after he gave some mince to his local foodbank that Mr Langford got thinking about how if 100 farmers in his home patch each provided an animal, no-one in the area would go hungry. Then he thought about the potential of expanding the scheme to the likes of Nelson or Christchurch, and eventually nationally.

The Federated Farmers national dairy chairman and his wife Tyler milk 250 cows once a day. He is also known as the YOLOFarmer (You Only Live Once Farmer) via his social media platform, which has a following of more than 125,000 people.

He recently had his 1356th day as the YOLOFarmer, a project that was born out of some mental health issues he had been having, which he and his family set about solving by setting a challenge to have "lived" every day.

Mrs O’Malley, who with her husband Christopher won the Share Farmer of the Year title at the 2017 New Zealand Dairy Industry Awards, said she loved the concept but knew it needed to "go big". What struck a chord with her was how much great food was grown in New Zealand and yet people still went hungry, so she was keen to be involved with a project that could be scaled to the whole country.

Mr Langford was speaking at the Boma NZ Agri Summit, where he raised his idea, and he was approached afterwards by Justin Courtney, head of communications and sustainability at Silver Fern Farms.

The company was looking for a way to contribute to communities as part of its sustainability programme, which it started in 2016. The ability to link and provide a connection between its farmer food producers and consumers — particularly those needing a "hand up" — was just so clear with Meat the Need, Mr Courtney said.

The team Mr Langford and Mrs O’Malley had around them, to support such a good idea, meant it had a profound impact on communities at a time that it was really needed.

When it started, there were members of the Silver Fern Farms team throughout the country working out of basements, bedrooms and sunrooms, to bring it all together.

Being able to do that while also running a business that was helping to "feed the world", had been a "miraculous achievement" and something the company took a great sense of pride in. Mr Courtney encouraged farmers and the wider community to support the initiative, as sustained success was wanted.

So far, the equivalent of 650 animals had been donated, providing 350,000 meals. It supplied 35 foodbanks across the South Island with a monthly supply of mince.

The support Silver Fern Farms had wrapped around the project had meant the structure and efficiencies were "pretty incredible", Mr Langford said.

The pair were just "a couple of dairy farmers" who did not really understand the complexities of the whole supply chain, so they could not have succeeded without the company’s support, Mrs O’Malley said.

But the whole thing would also not exist had it not been for the farmers, who formed a fundamentally generous community. They had also tried to make it as easy as possible for them to donate, she said.

meant they could focus more on their core role.

Mrs O’Malley said it was very satisfying to be involved with Meat the Need, the scale of which "kind of blows you away".

For Mr Langford, it was humbling, particularly around the support the initiative had garnered. And there was also a curiosity as to where it could grow within the industry.

Mrs O’Malley said the potential was "effectively unlimited" as it could be rolled out across lots of other parts of the farming sector, such as milk and grain.

With the year drawing to a close, it felt like she had "packed a lot in" and she was excited about what was going to happen next year.

For Mr Langford, it had been busy but rewarding and, while he sometimes missed his cows due to off-farm commitments, it was good to get out and meet farmers and see what was going on.

If YOLOFarmer — which would continue into next year — had taught him anything, it was that you never knew where you would end up at the end of the year, so "ride the wave".