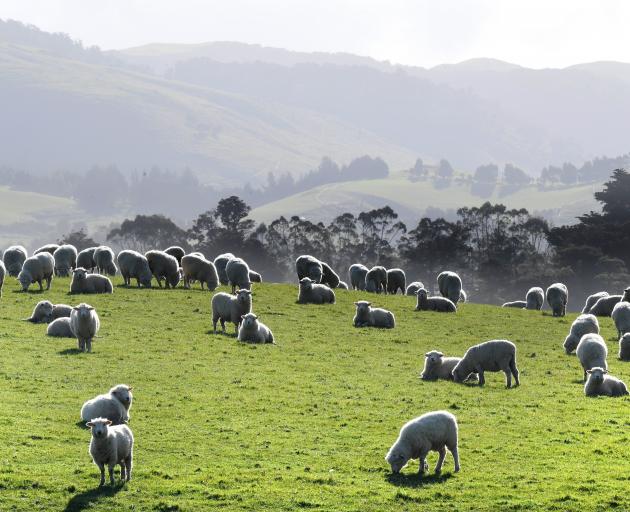 Sheep graze in the late afternoon sun beside the Owaka highway, prior to this week’s wintry blast in the South. PHOTO: STEPHEN JAQUIERY
Sheep numbers in New Zealand have dropped 2.3% over the past year to 26.21million — a far cry from the 57.85million recorded in 1990.

Beef + Lamb New Zealand’s annual stock number survey estimated this spring’s lamb crop would be 4.2% lower — or 980,000 head down — compared with spring 2019, while adverse weather events could lessen that further.

Ewe condition during mating was poor to average due to lower overall feed availability while ewe pregnancy scanning results were 5%-10% lower due to dry conditions and feed shortages. Fewer ewe hoggets were also mated.

"The impact of the combined decisions to destock younger animals this year will be fewer stock in future years. Capital breeding stock may have been retained this year but the effects of the disruption in 2019-20 will be felt for at least a couple of years.

Total sheep in Otago-Southland increased 0.7% to 7.79million head in the year to June, driven by the increase in breeding ewes on hand. Breeding ewes increased in all farm classes except for South Island high country which moved to higher ratios of cattle.

The number of beef cattle nationally was unchanged at an estimated 3.89million at June 30. More older cattle were retained due to the Covid-19 lockdown preventing processing, but fewer calves were purchased due to weak meat prices.

The number of cows rose in the hill and high country and fell on the plains. Prices for weaner calves substantially fell in autumn which would affect the number of beef breeding cows in future.

Disruptions to the flow of livestock due to processing restrictions as a result of Covid-19 restrictions on processing had a significant impact on southern South Island farms, the report said.

The restrictions, which started in late March, coincided with peak processing. Prime stock remained on farms for longer than usual and the market for store stock almost came to a standstill as sale yards were closed. Few paddock sales occurred.

Some southern farmers felt aggrieved, believing their farms were being used to hold stock as animals from drought-affected regions further north were brought south for processing. Delays for processing cattle were considerably longer than for processing lamb.

Wool on hand at June 30 was more than double last season’s as many farmers refused to take low prices. Others did not want unsold wool and wrote off shearing as an animal health expense. Most of the 2019-20 season production of fine wool was sold before Christmas.