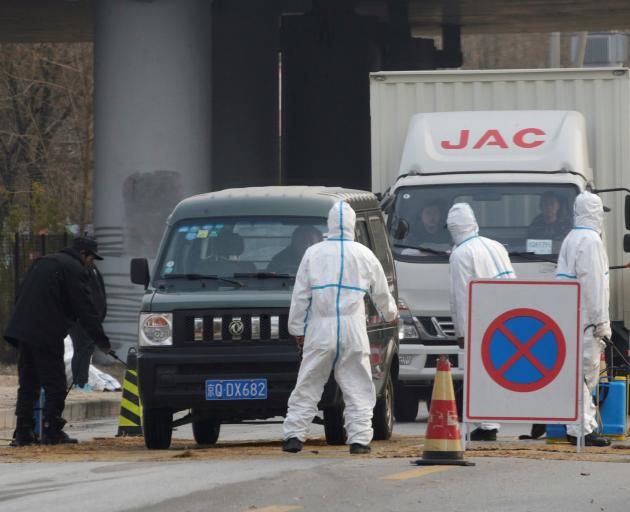 Workers in protective suits man a checkpoint on a road leading to a village near a farm where African swine fever was detected, in the Fangshan district of Beijing. PHOTO: REUTERS
China's African swine fever-affected pig herd is forecast to shrink to its lowest level in nearly 30 years.

African swine fever (ASF) has been found throughout much of China's pork country. The disease - which does not harm humans - has a high mortality rate in pigs, is very contagious and there is no vaccine or cure.

Reports of contaminated herds were down from the high levels in October and November last year but it continued to spread in China's hog-producing provinces, Prof Bailey said.

Pork was China's most consumed protein. Nearly 53 million metric tonnes were forecast to be consumed in 2019, translating into 40kg per person.

Chinese beef and chicken meat imports this year were expected to be about 20% higher than last year, according to current forecasts, and pork imports were forecast to grow almost 30% from last year's level.

``The consequence of this ASF challenge is likely to result in significant increases in pork imports, but could also result in increased imports of other meats, such as beef and sheep meat, which consumers may demand to compensate for a lack of pork or high pork prices,'' Prof Bailey said.

World consumption of beef and veal was forecast to grow almost 2% this year, with US consumption increasing 4%.

China's beef consumption was expected to increase 4%, partially in response to ASF issues but also continuing a well-established trend.

Much of that growth would be met by imported products and China's beef imports this year were forecast to increase 20% on last year.

Although New Zealand's total beef exports this year were forecast to drop more than 6%, exports to China, while currently expected to be very similar to last year's levels, could easily grow in response to greater Chinese demand, Prof Bailey said.

China was the world's largest consumer of chicken and the world's third-largest producer.

Since it depended predominantly on domestic production to meet consumer needs, its poultry imports were small.

As pork consumption declined because of consumer concerns over domestic pork quality and higher prices, chicken consumption could increase - at least in poorer areas, it was believed.

The potential for an increase in sheep meat or beef consumption, as a substitute for the reduced availability and higher prices for pork, was also an outcome seen by some analysts.

The possible increase in demand for beef and lamb was expected to be seen in more urban and wealthier areas.

Chicken volumes could be lifted quickly, given its short life cycle, and would see most benefit in the short term.

Rabobank's latest Agribusiness Monthly report said growing demand from China resulted in it overtaking the US as New Zealand's largest export market during the first four months of the 2018-19 season (October to January).