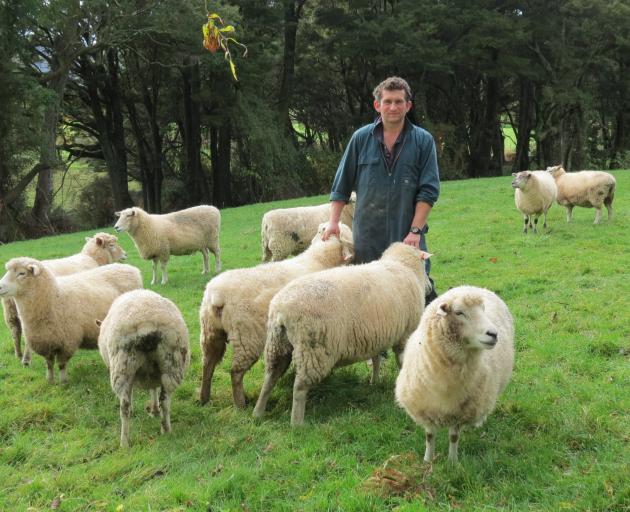 Improving hogget lambing...Sheep and beef farmer Geordie Eade, of Granity Downs, Pourakino Valley, is a member of Hogget 150, a Red Meat Profit Partnership-funded group of nine farmers working to achieve 150% hogget lambing. While they all scan up to 140%, they lamb at about 100%. PHOTO: YVONNE O’HARA
A group of southern farmers is working towards improving production — without the need for more land or higher inputs — by achieving 150% hogget lambing.

The Hogget 150 group has nine farmer members from throughout the region, including Clydevale, Blackmount, Winton, Riversdale, Pourakino Valley, Waimahaka and Mandeville.

The group is funded by the Red Meat Profit Partnership (RMPP) and has been allocated $4000 per farmer for three years, with the money used for research, guest speakers and also a trip to look at farms in the North Island with similar intensive hogget lambing operations.

Funding was originally scheduled to finish in June, but it has been extended to September.

One of the members, Geordie Eade, of Granity Downs, Pourakino Valley, said the group, who were all high production, intensive lambing farmers, wanted both 150% hogget lambing and to identify easier management methods to reach that target.

‘‘That is the challenge,’’ Mr Eade said.

He and wife Frances, who were this year’s supreme winners in the Southland Ballance Farm Environment Awards, farm 2020 ewes, plus 610 hoggets and 70 cattle on 260ha (220ha effective).

Their overall five-year lambing percentage average is about 160%+.

The group found they were more likely to get more hoggets in lamb and more lambs to weaning by looking after them well and feeding them on high-octane pasture.

‘‘Our aim is to grow in excess of 100g a day during winter compared to only 30g a day if they were put on winter crop. Southland does not have any trouble growing hoggets in excess of 200g a day [in the summer],’’ Mr Eade said.

The average well-grown hogget needs to go to the ram at 70% of its mature body weight, which equates to 50kg-54kg in the group’s case.

‘‘We have been experimenting with increasing the ram to hogget ratio, along with using more teasers to encourage ovulation and achieving pregnancy in the third or fourth cycle.

‘‘Your chances of a hogget being in lamb to twins is much higher if she gets pregnant in those cycles.’’

While poor weather, lamb dystocia and maternal inexperience can affect a successful lambing, well grown hoggets tended to get in lamb easier, have fewer lambing troubles and do not have as many animal health issues.

‘‘The bigger they are, the less shepherding they require.

‘‘Twins, on the other hand, are fed as much as they can eat from at least two weeks prior to lambing.

‘‘Their maternal instinct [as they go on to subsequent pregnancies as mature ewes] is greatly improved.’’

They also looked at the benefits of pre-lamb shearing for hoggets, and found if they did, the hoggets were more inclined to seek shelter with their lambs during bad weather.

By successfully lambing more hoggets, they added to their gross income without requiring extra land or more inputs.

‘‘We get great satisfaction from the results with what we are doing. It is money for jam.’’