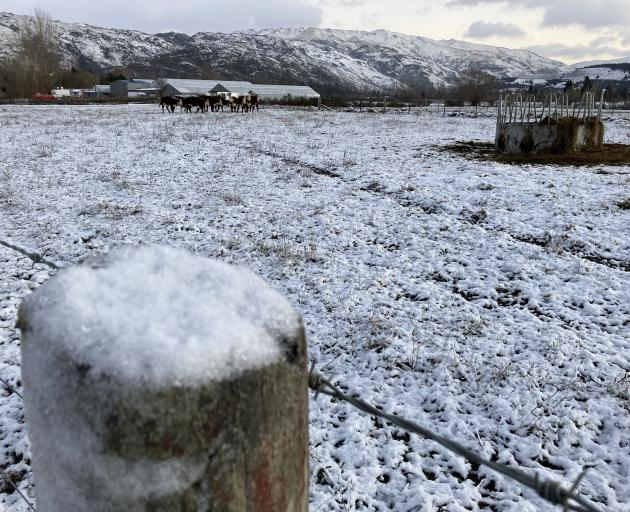 Otago-Southland farmers may not have much feed to spare this winter to help their drought and flood-affected Canterbury neighbours. PHOTO: MARY-JO TOHILL
A nationwide drought, followed by a Canterbury flood: with the recent cold blast, farmers throughout Otago and Southland are wondering what the winter will throw at them.

Even before the catastrophic May flood that caused significant damage to thousands of hectares of South Canterbury farmland, a call had gone out to the South to help the region’s drought-stricken farmers.

But most Otago-Southland farmers would not be in a position to give much assistance, Otago Federated Farmers president Mark Patterson, who farms at Lawrence, said.

"There’s a feel-good factor in what comes around goes around, that you’d get the help in a time of need, but with the feed situation, there’s limited capacity."

"Most Otago farmers won’t have a lot of spare feed."

For the first time, he would not have the usual 100 bales in reserve by the end of this year, and believed that most farmers would be in the same position, because of the drought.

"Initially, I thought I’d be reasonably comfortable, but I did the budget.

"There’s not a lot to spare, and the situation is not good in Otago. It’s better in Southland, but it’s got wet and cold, so they’ll be in the same boat.

"If Canterbury farmers can’t get grazing, they’ll be looking at a cull.

"Our A&P society is collecting up some bales for them. They may extract a bale [from each farmer], and I can expect to give two. We’ll help as best we can, but unfortunately that’s farming, and we kind of know all that.

"It’s fairly tough and the weather won’t help the situation."

It illustrated how proactive farmers had to be to have enough stashed away, he said.

"But unfortunately, Canterbury burnt up their reserves to get through the drought."

Southland Federated Farmers deputy chairwoman Bernadette Hunt said the region would help out as much it could, but with the bulk of the winter still to come, she stressed that farmers needed to be conservative with feed and grazing to not get caught short themselves.

" ... We all need contingency to cope with whatever winter might throw at us."

The Ministry for Primary Industries (MPI) is helping Canterbury farmers find alternative grazing for their livestock.

"MPI have been very clear from the outset that the last thing we want to see are issues in Southland later in winter because people were too generous at this stage of the season," she said.

MPI has allocated $4.5million to support flood-affected farmers, including providing grants to help repair uninsurable damage to farms, where pasture and winter fodder crops have been buried under flood debris.

MPI’s national feed co-ordination service has been expanded to help find grazing, distribute donated feed, and connect people with surplus feed to farmers who need it.

"Our feed co-ordinators had more than 35 additional requests from flood-affected farmers in the first half of June who need grazing and feed," MPI’s director of rural communities and farming support Nick Story said.

People with surplus feed or grazing, or farmers who need support to do a feed plan, can call 0800 FARMING (0800 327-646) or to register online via: Dealing with floods.