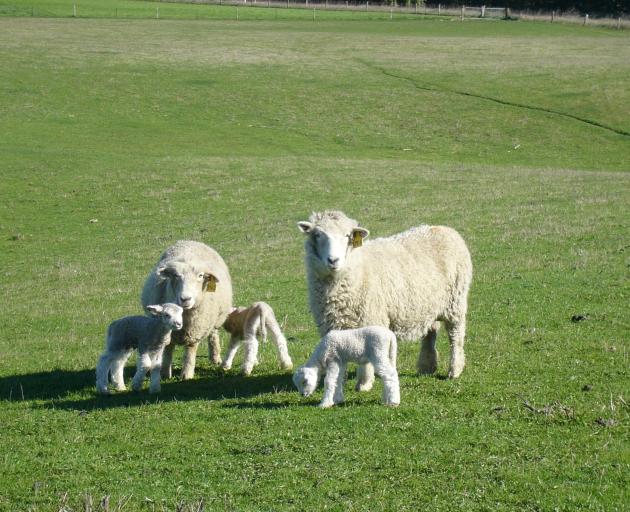 A drier autumn and reduced feed contributed to the average lambing percentage in Marlborough-Canterbury dropping 5.9 percentage points to about 123.5%. Photo: Central Rural Life files
The number of lambs tailed in spring 2019 fell by 2.4% — or 552,000 head — on the previous year’s tally to 22.7 million head, with most of the decline in the South Island, Beef + Lamb New Zealand’s economic service’s annual lamb crop report shows.

In a statement, chief economist Andrew Burtt said while the record high lambing percentage of 2018 was always going to be difficult to match, some regional declines were a ‘‘little surprising’’ last year and a reminder of the natural systems with which farmers had to work.

The 2018 result was a ‘‘fantastic achievement’’ that proved farmers were efficient and doing more with less.

‘‘It was going to be difficult to set another record. But the South Island, and Otago in particular, really struggled in 2019 due to drier conditions leading to lower feed availability,’’ he said.

The average lambing percentage in Marlborough-Canterbury was estimated at 123.5%, down 5.9 percentage points on 2018. Drier autumn conditions in North Canterbury and Marlborough-Tasman, and poor feed quality in South Canterbury, North and East Otago contributed to lower ewe body condition at mating.

Fewer lambs were conceived and scanning percentages were typically down by 10 to 15 percentage points despite fewer non-pregnant ewes on many farms.

Ewes in those areas continued to lose weight into winter and farmers reported an unusually high proportion of thin ewes at lambing.

As expected, given fewer severe weather events and fewer multiples, reported lamb survival was average to excellent across the region, except when early lambs were born into cold, wet conditions.

There was a strong regional variation and lamb growth rates were better in the North Island than in the South Island.

Many farmers in Marlborough-Canterbury reported disappointing lamb growth and weaning weights were expected to be down.

Hopes for good lamb weight gains, given fewer twins and triplets, were thwarted by lack of feed and poorer ewe condition.

Although those lambs survived in kind weather, they represented a long tail of small, slow-growing lambs that would take longer to finish.

Early schedule prices were ‘‘exceptionally strong’’ and some regions had achieved record high prices for lambs.

Despite the strong lamb market outlook and good profits for 2018-19, farmer morale in those regions was heavily dampened by uncertainty around proposed legislation, especially regarding options for future land uses and farm development such as irrigation.

Mycoplasma bovis remained a significant concern for sheep and beef farmers. Many farmers were ‘‘simply tired’’, having struggled to contribute to consultation on the Zero Carbon Bill, Essential Freshwater proposals and Environment Canterbury’s plan change 7 while simultaneously trying to manage lambing, calving and crop establishment for the coming season, the report said.

While few were actively trying to sell their farms, many had begun to suggest it might be unkind to encourage the next generation to take on the farm operation.

That demand, plus a lower lambing percentage, might increase competition for store lambs in late summer and autumn.

That might be slightly offset if hill country farms had limited ability to finish their own lambs, given a slow start to spring and lower weaning weights.