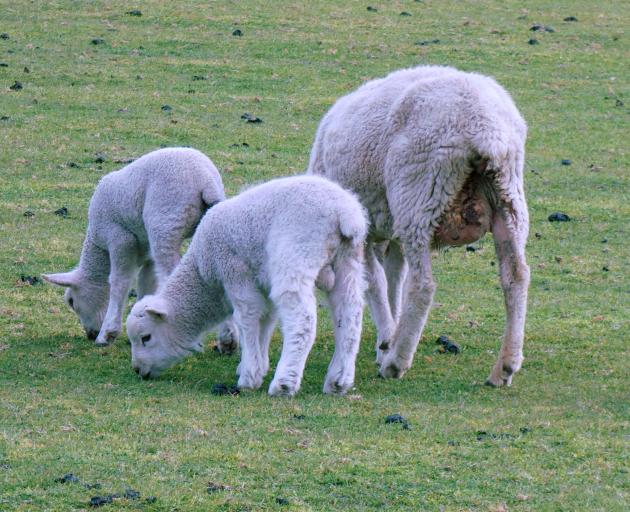 Lamb prices are expected to remain elevated until Christmas.
Sheep farmers are soaking up the good times as lamb prices remain high.

Lamb returns jumped to $9.35 a kilogram for a 17kg lamb in the South Island last month, about $2.07 a kg ahead of the five-year average. There has been little change over the past week.

Beef+Lamb New Zealand chief economist Andrew Burtt said some farmers appeared to have received as much as $10 a kg for their lambs in September.

However, he warned market expectations had to be realistic, as this price was for a handful of lambs and the meat schedule was coming out of its winter peak.

Demand for lamb was up as China, Europe and the United States recovered from Covid 19, he said.

‘‘Overall, the in-market price has been strong and we have a strong New Zealand dollar so that's taken up some of the gloss on things. This is leaving us where we are, which is better than previous years.''

African swine flu in China's pig herd has also reduced pork on the menu for restaurants and increased demand for lamb, mutton and beef.

‘‘Looking over the next few months, expect demand in China to be steady because they are heading into winter and the hot pot season. That could change if there’s a Covid outbreak.’’

China had been consuming 52% of New Zealand’s lamb exports, the European Union 13%, United Kingdom 11% and the United States 9%.

Ms Steven said more lamb had been eaten at home as the United States was opening up again with people enjoying stimulus spending to get through Covid.

The lamb kill was down 3.3% for the season to September as 300,000 fewer lambs were born. That would also have a bearing on prices, she said.

She noted the ewe kill was 9% ahead this season because autumn had been very dry, particularly for eastern parts of the country.

‘‘There is definitely strong demand and fewer lambs around helping to push prices up.’’

Ms Steven said lamb prices were expected to remain elevated to Christmas and reduce afterwards in line with seasonal supplies.

Mr Burtt said the main challenges ahead were Covid-19 uncertainty, transportation delays and the labour shortage for exporters who had to get meat through plants and honour contracts.

He said the price outlook would depend on continued demand, beef prices and whether world economies picked up.