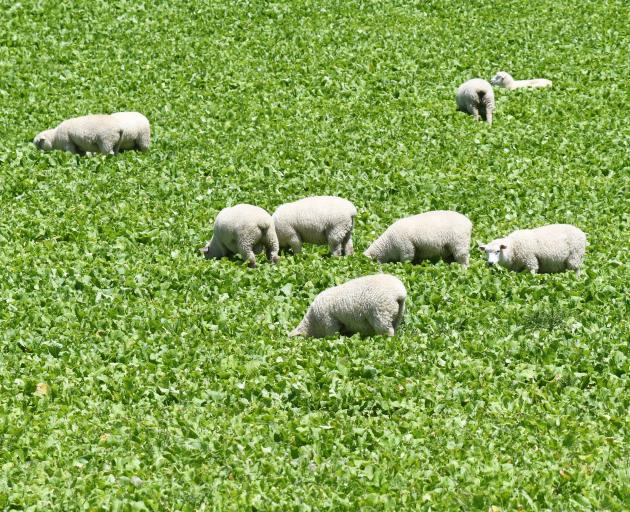 Lambs graze alongside State Highway93, between Clinton and Mataura, yesterday. PHOTO: STEPHEN JAQUIERY
Otago has been the major driver of a lift in lambs born in the South Island this year, with the region recording a 3.9% increase in total lamb crop.

Nationally, sheep farmers achieved a near-record 130.3% lambing percentage, despite Covid-19 related processing restrictions and widespread drought in the first half of 2020. That was only slightly lower than spring 2019 where 131% was achieved, the report said.

Lamb and sheep export volumes were expected to be more significantly impacted by the follow-on impacts of the drought, due to lower animal weights and the retention of sheep for breeding to rebuild stock numbers.

B+LNZ’s Economic Service estimated the number of lambs tailed in spring 2020 decreased by 1.5% or 357,000 head on the previous spring to 22.9million head. Most of the decline occurred in the North Island due to drought conditions, while the total number of lambs in the South Island increased 1.6% (189,000 head) to 12.1million head.

The total number of lambs processed for export in the 2020-21 season was expected to decrease 4.5% from 19.1million head in 2019-20 to 18.2million head. The amount of lamb produced was expected to drop 4.7% due to a combination of fewer lambs and a slightly lower average carcass weight.

In Otago-Southland, a significant proportion of first quarter (October-December) processing was old season lamb. The supply gap between old season lambs and the start of the new season’s lambs might not be as pronounced this year as some farmers drafted earlier if farming conditions were dry.

Good growth rates this spring might result in increased volumes processed in the first quarter, particularly compared to last season.

Early drafting patterns across the region were expected to be as usual. However, some farmers were keeping a close watch on the developing La Nina weather pattern which was forecast to bring a drier than usual summer to the South. Early weaning was one strategy being considered to manage that.

There were several key themes of concern for farmers across all regions in November, including environmental pressure and uncertainty, disappointing strong wool returns, competition from forestry, and lower farm gate prices in the 2020-21 season due to global market uncertainty.

Margins were also being eroded by the appreciation of the New Zealand dollar.