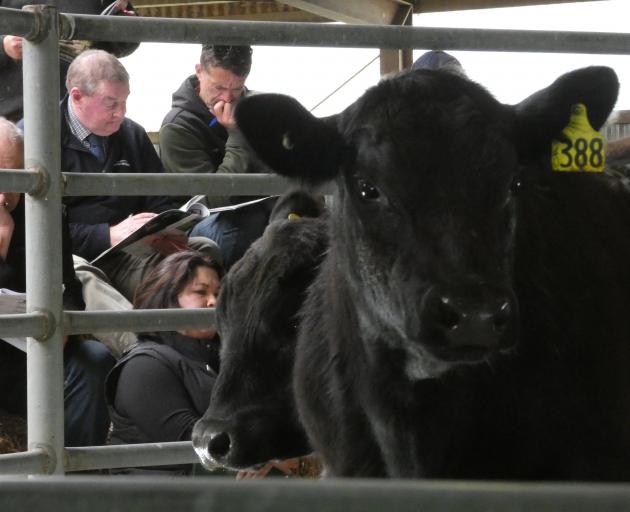 A deep catalogue drew out the bidding at Stern Angus stud’s yearling sale. PHOTOS: TIM CRONSHAW
Stern Angus has topped the breed for this season’s farm auctions nationwide after selling a yearling bull for $18,000.

Final bids started from $2200 for the 39 yearlings offered by James and Fi Fraser, with their son, Rob, at their on-farm sale at Pleasant Point on October 13.

The fourth-generation stud had a full clearance with the top price a yearling record for Stern and the overall average of $5200 a near record.

About 40 registered buyers and a 50-strong online audience competed for the catalogue at an auction enclosure against a backdrop of historic buildings at Sterndale. Most of the yearlings went to commercial beef farms with a handful going to the dairy industry.

James Fraser said they had to resist the temptation to keep Stern 20100 for themselves.

‘‘We were asked that question a few times before the sale about why we had decided to sell some of the top bulls and it was getting increasingly difficult to answer that question as we got close to the sale. We decided to offer these bulls knowing they were stud quality.’’ 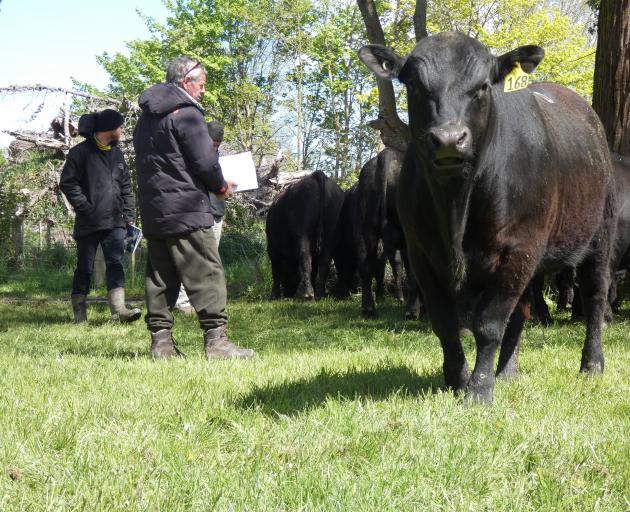 Potential buyers eye up the talent at Stern Angus’ yearling bull sale.
He said the end price was not a surprise because they knew its phenotype and performance package would be sought after.

His overall balance and high rankings in the self-replacing and Angus Pure indexes had caught the eye of at least eight bidders.

The Kane family from West Otago’s Tapanui put up the top bid, while Stern 20118 was bought for $11,000 by Dean and Teresa Sherson, of Taumaraunui’s Black Ridge Angus, and Waihopai Valley’s Leefield Angus took Stern 20131 home for $10,500.

The trio were all sired by Te Mania 16463, bought by the Frasers in 2018. Another 11 bulls in the age group with the sire are being kept for Stern’s June sale.

Another stud bull went for $10,000 to Hillcroft Angus in Waikato.

Stern’s yearling catalogue was drafted from 337 bull calves, with other sires coming from Lazarus and the sons and grandsons of Braveheart.

Mr Fraser said high prices got the headlines, but they were pleased buyers could get bulls across the full price range.

‘‘It’s great to get the high prices, but ... we like to offer a consistent quality throughout a catalogue.’’

The successful result follows Stern’s June sale when Tangihau paid $64,000 for Stern 19061, a record for the stud.