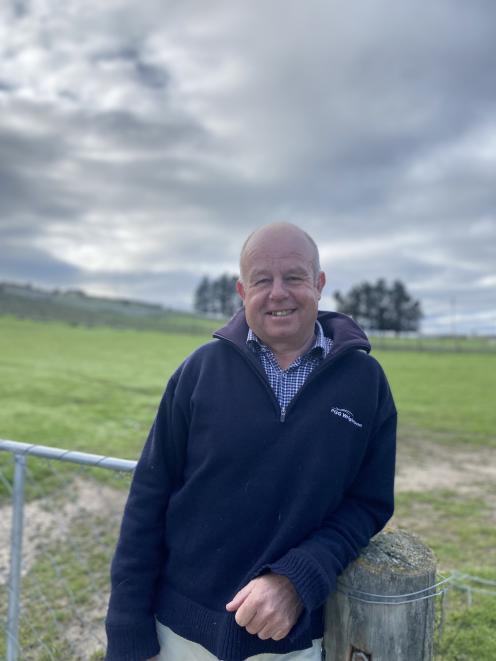 PGG Wrightson livestock agent and head auctioneer Chris Swale is moving to Southland to work in rural real estate.PHOTO: ALICE SCOTT
In an era where the only certainty is change, livestock agent Chris Swale says having a good work ethic and 100% commitment has always stayed the same.

After 35 years in the livestock trading industry, Mr Swale is making the move back to his Southland roots to take on rural real estate sales for Country & Co.

Born and raised on a sheep and beef farm at Limehills, in Central Southland, Mr Swale started working as a livestock agent around the age of 20. “Dad was still pretty fit and able. The farm wasn’t big enough to have me there fulltime so I thought I would give it a crack as a livestock agent.”

“I haven’t really looked back, to be honest.”

The way he has been able to conduct his business has been hugely helped with the advancement of cellphones.

“Back in the day before most farmers had a cellphone in their pocket, I would do a lot of my work in the evenings after 7pm. Never ring between 6pm and 7pm was my rule of thumb, as they would be having tea and watching the news.

“Nowadays we can do most of our work during the day, as everyone has a cellphone on them. A lot of clients also just prefer a text message if it warrants it.”

Mr Swale started out as “the boy” and slowly worked his way up through the ranks. Later on, he made the shift from Southland to Otago and became Otago livestock manager for PGG Wrightson and then head auctioneer.

“I have worked with a number of top people, too many to single anyone out really, but they were the best in the game, and I learned a lot from them all.

‘‘I achieved everything I set out to do in my job; I feel like now is the right time for a change.”

Dealing with hard-working farmer clients has been a big highlight for Mr Swale.

“A lot of them are friends just as much as they are clients. They are passionate about what they do, and I in turn was very passionate about making sure I did my best for them, being totally committed to getting them the highest dollar after a full year of hard graft. It’s been a really satisfying job.

“I got to see some awesome countryside too. That’s been pretty special.”

Mr Swale's advice for up-and-coming agents was simple: ``Just be committed to your vendor. You will gain trust over time with integrity.

``It doesn't hurt to take a bit of personal pride either; tuck your shirt in, dress to code and be respectful — that all helps.’'

Any thought of winding down and taking it slightly easier as Mr Swale heads into the decade before he can claim a pension is wishful thinking.

“From all accounts it sounds like I am walking into quite a busy portfolio of farm listings. Country & Co appealed ... their values align with my own. They have been asking me to make the move down to them for a while now, and I thought now was as good a time as any.”