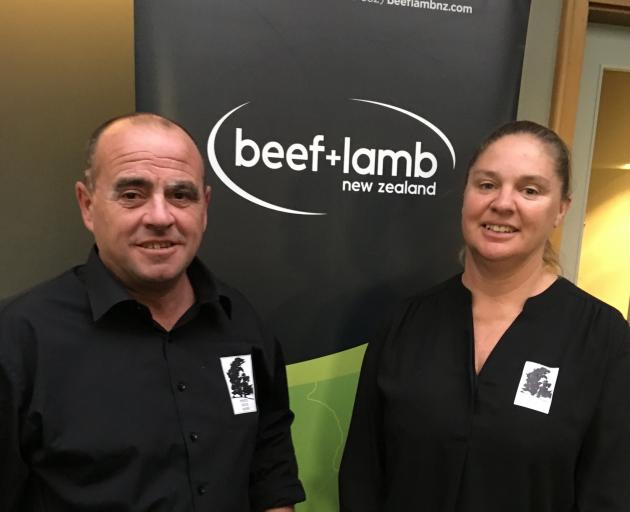 North Canterbury farmers Duncan and Tina Mackintosh talked about the benefits of technology at Beef + Lamb New Zealand's FarmSmart conference in Christchurch last week. Photo: David Hill
Tina Mackintosh admits there were some late nights loading data after she and husband Duncan opted to embrace technology more than a decade ago.

The Mackintoshs, who farm at White Rock Mains, north of Rangiora, shared their journey of using technology to improve their farm system at last month's Beef + Lamb New Zealand FarmSmart conference in Christchurch.

''We have a curious mind about data and what it can do, and we also believe it's about sharing the good things when they work and, equally, not being afraid of sharing when the shite happens,'' Mrs Mackintosh said.

''As we were going along the journey we had two babies, so we were entering data late at night. There was a lot of data to enter so it was quite frustrating.

''But the time and effort we put in we got back.''

The couple introduced EID (electronic identification) tags in 2007, were part of FarmIQ's development group from 2007 to 2010 and then FarmIQ's upper South Island monitor farm from 2010 to 2017.

After three years of trial and error, the couple realised the technology could be a game-changer.

''We sat down and decided what data we were going to collect. By this stage all our ewes were EID-tagged and we came to the conclusion that weaning was going to be the start and not the finish in our business.''

They decided to record body condition scores of ewes at weaning, six-weeks pre-mate and at mating, the body weight of two-tooth ewes and hoggets at the same stages, as well as scanning and tailing results to monitor lamb survival rates.

Mr Mackintosh said body-condition scoring was a relatively new measure at the time.

''We got pretty worked up about this as we were condition-scoring everything at 3.1 or 3.2 and that lasted for two years and then it fell into the category of 'it either needs a feed, or it doesn't' - we wanted to make it simple.''

As lamb survival rates were low, the couple opted to move to a later lambing date, when there was plenty of pasture on-farm.

''Moving the lambing date wasn't an easy decision, as we were lambing later than everyone else in our area,'' Mr Mackintosh said.

''But it's worked so far because the ewes have got more grass when they're lambing.''

Earlier this year the couple won the supreme award in the Canterbury Ballance Farm Environment Awards.