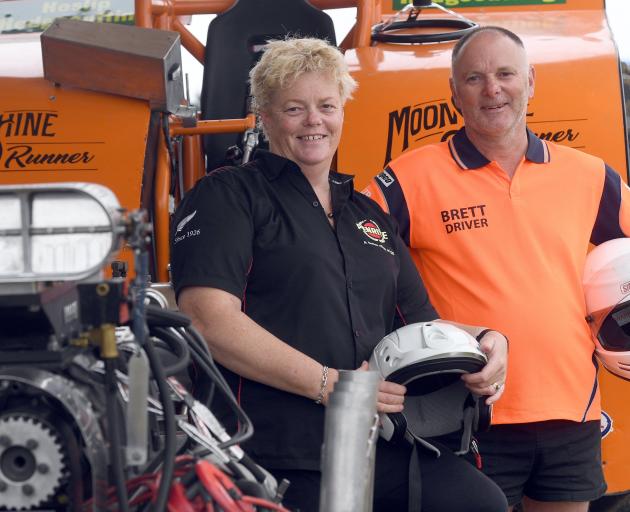 Southland couple Lisa and Brett Heslip share a love of the sport of tractor pull. PHOTOS: STEPHEN JAQUIERY
They say the couple that plays together, stays together.

In the case of Southland couple Brett and Lisa Heslip, their shared hobby is of the very noisy kind; they are enthusiasts of tractor pull, a phenomenally loud and curiously fascinating combination of sheer grunt and horsepower.

It was easy to find the tractor pull area at the Southern Field Days at Waimumu on Friday, as it just required following the noise.

Mr and Mrs Heslip were both in action — Mr Heslip aboard Moonshine Runner, a methanol-powered machine that he imported from the United States four years ago, and his wife on Mitsin Bits.

Mr Heslip, who is a hedge-cutting contractor working around the wider Gore area, said the sport was "huge" in the US and throughout Europe.

He described it as "just good fun", saying it was "something totally different", and it was not particularly dangerous.

Mark Dillon, from Riversdale, attracts a crowd as he competes in the tractor pull at the Southern Field Days.
"It really does draw people.

"You get a lot of people coming over having a look, having a yarn," he said.

Mrs Heslip got into the sport two years ago, after lying in bed one night and announcing to her husband that maybe she should "give it a go".

Next minute, Mr Heslip was on line and found a Mitsubishi truck which was now transformed into Mitsin Bits, having previously been known as Flirting With Disaster.

Once it was ready for Mrs Heslip, she tried it out on a grass paddock and "you couldn’t get her off it", her proud husband said.

Several women were already competing in the sport, and there was no reason why more could not get involved.

Upcoming events for the couple included the Mayfield A&P Show, and the Balfour Backyard Beauties.

Their son Harison (12) was a valuable pit crew member and he hoped to compete himself next year.