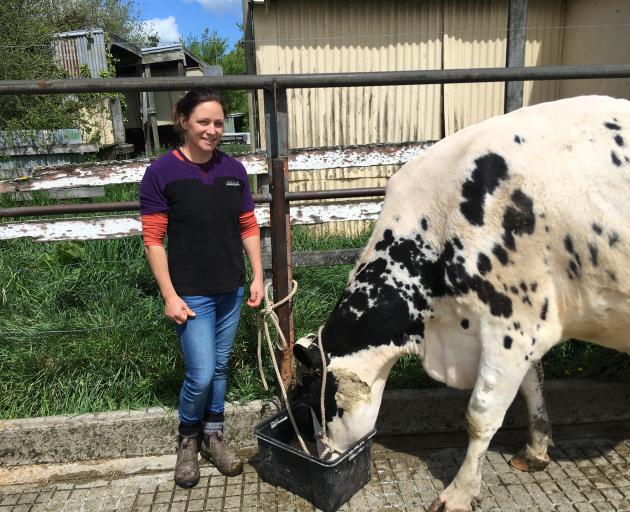 The North Canterbury dairy farmers have won supreme champion dairy cow at the Christchurch show for the past three years and have a team of seven cows in training for this year's show.

Olivia Cahill farms with her husband Jared and father Peter Sherriff at Ohoka, near Rangiora, and is in charge of preparing the team of cows for the show, which is being held at Canterbury Agricultural Park from November 13 to 15.

"We start about four to five weeks out by bringing them off the grass and putting them in the shed, feeding them hay, putting them on the halter and then returning them to grass.

"A week out from the show they are just on dry feed, replicating what they will get at the show."

Mrs Cahill said the pens at the show were prepared over the weekend, "so by the time we bring the cows in on Monday they can just walk in, sit down and relax". 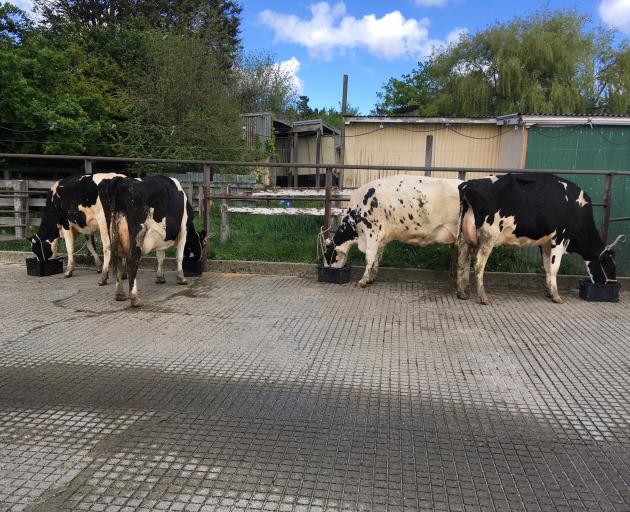 Seven Sherraine stud cows are being transitioned from grass in preparation for the New Zealand Agricultural Show.
The cows will stick to their normal schedule of morning and evening milkings during show week, except on Thursday which is judging day.

"We get them full of milk on Thursday. We will work out how much milk to keep on them so the judge can look at how they hold their milk up," she said.

"It's about taking what you've bred and showing them off and hopefully doing well."

Mr Sherriff said showing cattle was about production attributes, rather than "a beauty contest".

"Most farmers would be happy if their cows were producing 20 litres and it doesn't cost twice as much to feed her and you don't need to get her in calf twice as often to get that 48 litres."

The Sherraine stud cows weighed in at around 600kg each, which is considered "too big" by New Zealand standards, and American genetics were used in their breeding, meaning the Sherraine herd had a poor "breed worth" rating with Livestock Improvement Corporation (LIC).

"We have a minus-187 breed worth, which is considered one of the poorest herds in New Zealand," Mr Sherriff said.

"But how many cows have produced more than 45,000 litres of milk in their lifetime?"