Last calves go under the hammer 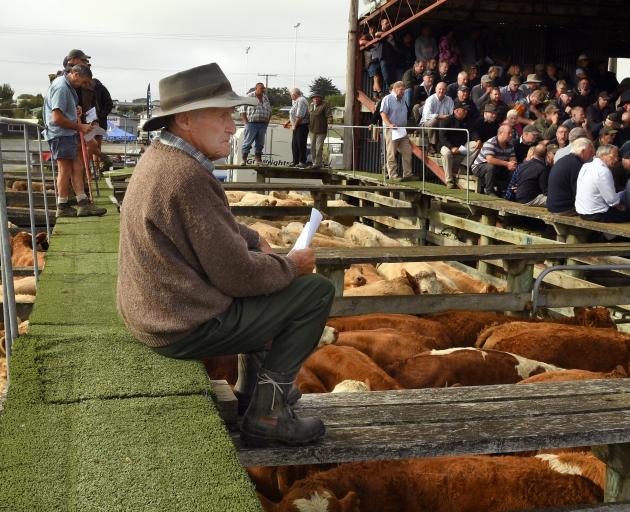 Waikawa farmer Maurice Yorke first attended stock sales in Owaka with his father in the 1940s. Photos: Stephen Jaquiery
It was dubbed The Last Hurrah.

Rural folk from throughout the Catlins and further afield gathered on Thursday for the last-ever Owaka calf sale. 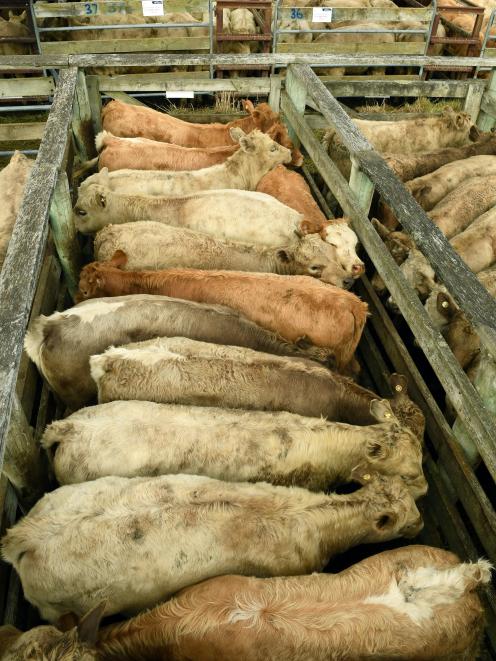 A pen of calves.
As the stories and nostalgia flowed - many commenting on how long it could take in years gone by to get home from the sale - there was also a touch of sadness.

PGG Wrightson, which owns and operates the saleyards, is moving the sale from next year to a special sale day at the Balclutha saleyards.

The company said the Balclutha facility would offer a bigger gallery of buyers and also scales - which were absent from Owaka - to ensure weights were accurate.

Well-known local farmer John Burgess said the first Owaka calf sale was held in 1958, a date he knew, as he attended the sale.

However, there had been stock sales held in the town every second Thursday, a day that people also did their shopping in the town.

There were also big cattle sales in Owaka in October and November and the train would have to take two trips over Tunnel Hill if the yarding was too big.

One of the auctioneers at that first calf sale in 1958 was Frank Parks, whose son Winston was at the last sale.

Among the vendors at the first sale was Toko Murray, whose late son Bruce's estate topped the last sale, along with other well-known Catlins farming family names.

The following year, black steer calves sent in by train from Tahakopa by Dick McLennan topped the sale, making over £20.

There were no exotic cattle in those days but there were some very good roan Hereford calves, Mr Burgess recalled.

Exotic-bred calves have topped the sales in latter years, Simmental and Charolais breeds to the fore, he said.

Some years, 4000 calves were offered and two calf sales were held - one week it was for calves from north of the Catlins River, and the next week it was those south of the river.

Farmers' legs on display.
Mr Burgess understood the reasons behind the closure of the sale yards, citing the upkeep and health and safety, and also the fact only one sale was held a year.

Local farmer Jim Berney (72) was 19 when he first sold calves at the sale. While he could understand the reason for closing the yards, saying they were getting "a bit stuffed" and young farmers preferred to buy off scales, it was "a sad day for Owaka", he said.

Robbie McDonald, of Gore, used to farm at Wyndham and reckoned he had been attending the sale for 30 years or more.

In years gone by, it was a big trip and it could take a while to get home. He returned for a catch-up this year and to see the "best calves in the country".

Winston Parks (77) said it was a "sad for us older jokers". Mr Parks, who had topped the sale a few times, including with heifer calves in the 1960s, recalled the heady days of both the sale and the town. He could remember when there were two banks, five stock firms and two grocery stores.

There was "no doubt" that some of the best calves in New Zealand had been sold through the saleyards, he said.

Maurice Yorke, who sensibly announced he had "capped" his age at 80 - although later admitted to being 81 - first started coming to stock sales in Owaka with his father about the time of World War 2.

From Waikawa, on the southwestern edge of the Catlins - also referred to as "through the bush" - he was enjoying his day out.

"It seems a shame to see it fade ... but the world moves on. There's so many rules and regulations that we've got to have," he said.

Perrins Transport co-owner Alistair Perrin (66), who has been driving since he was 18, said it used to be an extremely busy time for the company, as well as the buyers, sellers and agents. And there also used to be a "big party" at sale time.

"It's been a huge part of the community for a large number of years," he said.

He recalled watching drovers drive calves from the yards and put them on the train; the railway line ran through the town.

Perrins brought in the majority of the calves for this year's sale and he agreed it was a "really sad day". "It's another thing lost and it's gone for good," he said.

On a brighter note, there were a lot of people that he had not seen for years that had turned out for the last sale.

And he was a member of the local Lions Club, which had been given the job of dismantling and selling the yards as a fundraising project. 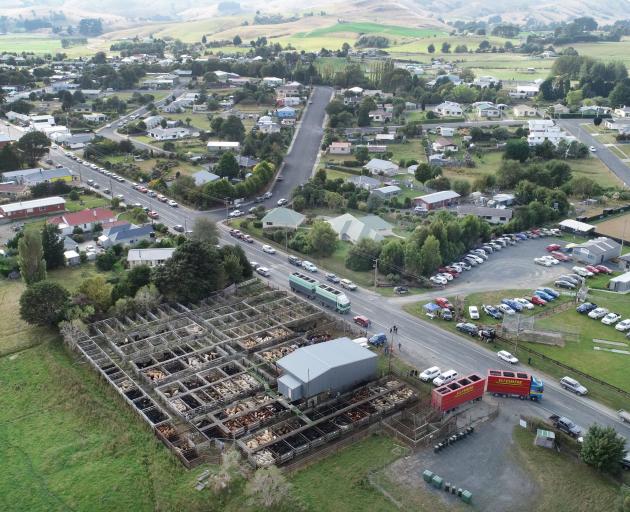 A aerial view of the saleyards on the outskirts of Owaka.

Mr Murray "lived and breathed" for his cattle and supported the saleyards for a very long time.

For Mr Gamble, the Owaka sale was one of his favourites - he loved catching up with both vendors and purchasers, and he loved the calves that were offered.

Those attending stood for a minute's silence in memory of the two men.

Mr Swale said the quality sold was some of the highest in the country. Owaka was "very, very good cattle country" and calves bought from the area shifted very well.

More than 880 calves were on offer and the average price was $828. The top price went to the Estate of R.B. Murray for a pen of Charolais-cross steers for $1180.

PGG Wrightson agent Craig Dempster said there was quite an adjustment from last year's sale and prices were back probably $150-$200 per head.

Quality was high and the calves were presented in "outstanding" order.