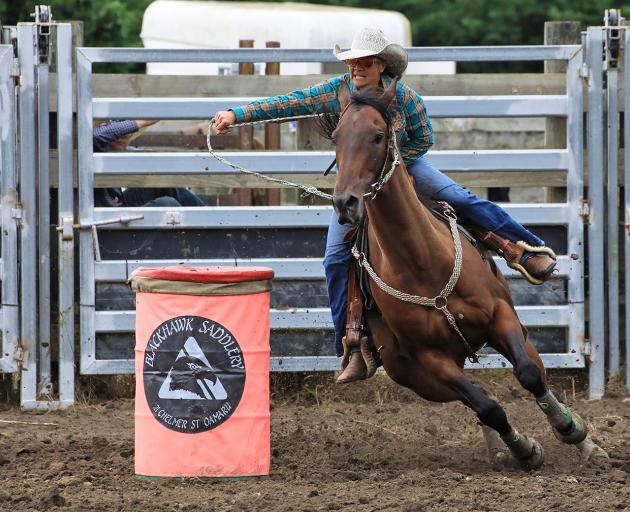 Oxford’s Rhondine Long has given Corey Church, of Rotorua, a run for his money as best all-rounder in the shortened 2019-20 season. Photo: Adair Wilson Imageart
The grand finale of the 2019-20 rodeo season has become a casualty of Covid-19.

The national finals rodeo scheduled for March 28 at Millers Flat has been cancelled.

Instead of the top eight contestants in each of the eight rodeo events fighting it out for national honours, the championship titles have been awarded to the those cowgirls and cowboys who were at the top of the standings when the regular season ended on February 29.

For the first time in New Zealand rodeo’s history a cowgirl, Rhondine Long, from Oxford, was leading the standings for best all-rounder only to lose her lead to previous winner Corey Church, of Rotorua, by the narrowest of margins — a mere 33 points.

Defending all-round champion Patrick McCarthy, of Wanaka, had to settle for third place in the all-round categorybut won the rope and tie championship title for the second consecutive year.

The saddle bronc produced another tight tussle between Jeremy Dillon, of Kaikoura, and Lane Whitelock, of Hastings, with Dillon emerging the victor.

“We feel for those competitors who will be disappointed not to be able to change their standings at the finals, and maybe win a championship title, but these are the times we live in,” he said.