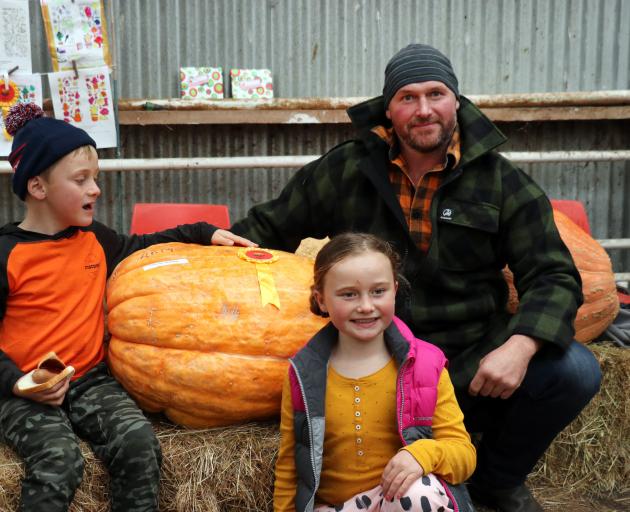 Hamish Wilson (right) won the title for largest pumpkin grown by an adult. He is pictured with his children Charles (6) and Dorothy (8). PHOTO: JACK CONROY
Pumpkins, horses and magic. It might sound like Cinderella's ball, but this strange combination comprised the South Otago A&P Society's third annual Giant Pumpkin Day in Balclutha.

Competitors and punters from across the Clutha district and even further afield came together at the Balclutha A&P showgrounds yesterday to watch the judging of the Giant Pumpkin competition, the horse and pony show, buy food and craft products from local stallholders, watch a magic show and enjoy live music.

"A lot of the groups who have come along today are fundraising individually, and we thought it would be nice for them to be able to do it in one place on the same day."

Hamish Wilson, of Clutha Valley, won the title for largest pumpkin at a hefty 48kg.

Mr Wilson had entered the competition in previous years, but this was his first win.

His top tips for growing large pumpkins were "a lot of sunshine, a lot of heat . . . and a lot of water".

About 20 people and their horses and ponies signed up for the horse and pony show a few metres away.

Competitors went through the lead rein challenges, where children and their parents would lead the pony around, along with riding and presentation challenges.

Sasha Gilliland, of Clifton, and Poseidon P were dubbed the best presented pair.