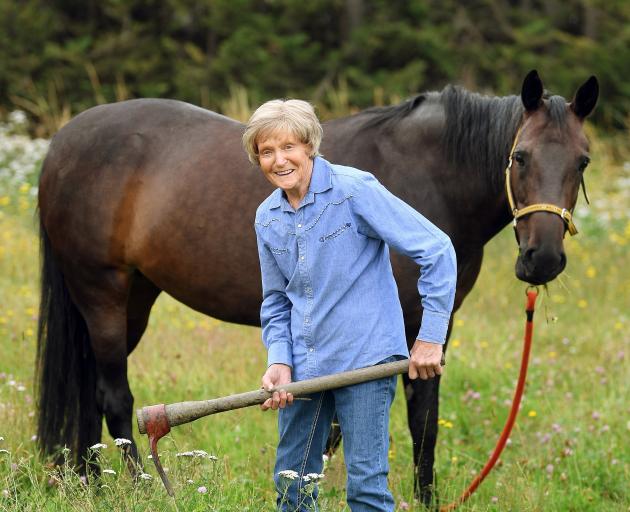 Alice Sinclair (86) grubs weeds on her Taieri property before saddling up Keira for this year’s cavalcade. PHOTO: STEPHEN JAQUIERY
"She's just a treasure."

That’s how Chris Bayne describes fellow cavalcader Alice Sinclair (86) who is preparing for her 30th consecutive Otago cavalcade next month.

The adventure-loving great-grandmother of 15 has ridden every cavalcade since the inaugural event in 1991 and is somewhat of a legend on the trail.

She might rue her knees were "starting to give out" but she made few concessions for her age, including bungy jumping when she turned 85. When contacted last week, she was preparing to grub thistles in the hay paddock of her Taieri property.

Mrs Sinclair did not take up horse-riding until she was in her 40s when her late husband Len gave her the money to buy her first horse. Growing up, her family never had much money and "couldn’t afford that sort of thing".

A woman down the road had a truck and Mrs Sinclair had access to chainsaws, thanks to the long-established family business Sinclair Saw and Mower, and the pair would cut firewood from willow trees. The proceeds bought her first saddle and bridle.

Mr Sinclair later joined her in the saddle and the couple became heavily involved in the Otago Pleasure Horsemen Club, receiving life membership in 2005.

Mrs Sinclair rode thousands of kilometres and won many ribbons, certificates and trophies and it was her involvement with the club that led to her riding the first cavalcade.

After her husband’s death in 2015, she did not think she would take part in the following year’s cavalcade. But her family encouraged her and her daughter Janette Philp, an adventure trek leader, travelled from Australia to provide back-up.

Mrs Philp has since returned each year and, after four months of applying online in the random voucher lobby, she obtained a MIQ hotel quarantine voucher for this year’s event, much to the delight of her mother.

"Janette loves it, she’s got to know all the people . . . she’s just one of us now, one of the family. It’s one big happy family," Mrs Sinclair said.

The main attractions were the countryside participants traversed through and the people involved.

"Every year you meet up with the same people or new people. It’s marvellous," she said.

Having spent many years on the Tussock Creek light wagon and riding trail, she had got to know the regular participants on that trail well. And then there was the delicious meals prepared by long-serving caterers, the Oamaru Scouts, which she enjoyed.

Mrs Sinclair’s mount Keira had "a bit of spirit" in her — "she can move in a hurry" — and was nice-natured.

"Now I’m getting a bit older, I more or less like to stay on my horse. I used to get off and run down the hills."

Mrs Bayne, a former long-serving trail boss, described her friend as "the most amazing lady" and "an inspiration to us all".

"I never had to growl at Alice. She was always up on her horse ready to go; she loves the country we go through.

"Everyone in the morning would be looking for a bank or something to get on their horse. Not our Alice — foot in the stirrup and up.

"One girl’s stirrup fell off and [she] said ‘God, I can’t get off, I just got on’, so Alice pops off, gives it to her, pops on again in her early 80s. We call her our Energizer bunny.

"She has only growled at me once and that's when l told her to get off her horse and into the truck. It was blowing a gale, pouring with rain, we had done 25km and still had a way to go.

Mrs Philp, who said her mother seemed to get more youthful as she got older, described her as "the hardest-working, the kindest and the most generous woman".

She fostered a child when she was 41, spent 20 years as a volunteer ambulance officer, taught cake decorating for 10 years at Taieri High School, gave voluntary service to Good Samaritans for many years and was involved with Wyllies Crossing Tennis Club for 40 years.

At 70, she walked the Milford Track and 75km on the Camino Salvado Trail in Western Australia.

The following year, she biked the Otago Rail Trail and then walked the Routeburn and Kepler tracks consecutively. She walked the Heaphy Track in 2017.

She went skydiving when she turned 65, took a glider flight for her 83rd birthday and described bungy-jumping as "a bit scary but terrific".

Adventure-seeking was somewhat of a family trait; her grandmother Alice Mitchell cycled from Gore to the North Island in 1895, although Mrs Sinclair preferred the saddle of a horse to that of a cycle.

She has two favourite vehicles — her Polaris six-wheeler motorbike which she used daily — and her ride-on lawn mower which she regularly used to mow her extensive and immaculate lawns.

Asked the secret to keeping so well, Mrs Sinclair, who grew most of her own vegetables, said diet — "just plain, ordinary food".

One thing she was looking forward to on the cavalcade, which finishes in Millers Flat on March 5, was not having to cook.