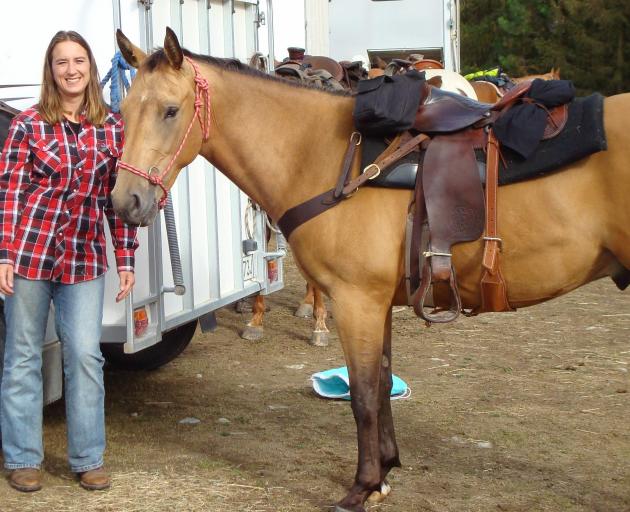 Mackenzie A&P Highland Show secretary Jodi Payne loves spending time with animals in her down time, especially her horse Barley. PHOTO: SUPPLIED
Behind the biggest one-day A&P show in New Zealand is a secretary who has planned it for seven months.

Jodi Payne has been the Mackenzie A&P Highland Show secretary since April 2010, with her first show at Easter 2011.

Her role meant she had to be working hard behind the scenes, which "always changes in the year".

Mrs Payne started planning the show in September by organising sponsors, entertainment, food and drinks and getting the schedule of classes ready.

In January, Mrs Payne and the committee started getting the schedules out. She would put entries into the computer, organise advertising and invite people to the show, such as other show presidents, as well as order ribbons and rosettes, and she also had to create a programme for the day.

The A&P showgrounds in Fairlie are packed for the biggest one-day show in New Zealand with more than 10,000 people attending. PHOTO: SUPPLIED
Mrs Payne applied for the role because she needed to "find a job that suited being a rural mum" in Fairlie.

Living in a small community with her husband and two children sometimes could be "quite hard to find something that will fit in with living rurally ", she said.

The good thing about her role was that she could work remotely from her home office, and go to the A&P showgrounds only when necessary.

She also liked meeting people in the community who she would not have met otherwise.

With her farming background, she liked the show, being around animals and having a goal to work towards every year.

After the show, organisers still had to "wrap everything up", Mrs Payne said.

Along with other committee members, she had to make sure all the results were entered into the computer and distributed.The cleanup also took a while.

The committee also sent thank-you notes to those involved in helping make the show come together.

Mrs Payne is a paid part-timer and the treasurer is another part-time contractor.

Everyone else volunteers, which includes a management committee of about 25 people who meet every month.

However, on the day of the show there would be close to 200 volunteers.

The Fairlie Lions Club helped volunteer at the show, particularly at the car parks and gate taking. The committee paid the club to help organise the volunteer team.

"I couldn’t do it without a large team," she said.

With a busy schedule and good communication skills needed for a job like this, being secretary was nothing Mrs Payne could not handle.

"I’ve managed restaurants before. I’m used to a busy environment and customer service."

She quipped she dealt with "more than 10,000 people on the day". She also had to know how to defuse situations if something went wrong by coming up with a Plan B or cancelling if the situation was out of her control.

"With such a big event nothing is ever gonna run 100% smoothly."

Last year, Covid-19 saw the committee have to cancel four weeks before the show was meant to happen.

However, this year she felt very "excited" about the upcoming Easter show. Before the pandemic it "didn’t really cross our minds of cancelling".

Cancelling a show had not happened since the 1940s due to "a couple of pandemics and wars". Since Covid-19, she now had to think at any given time the show could be forced to cancel.

"We’re not accumulating costs that could be wasted."