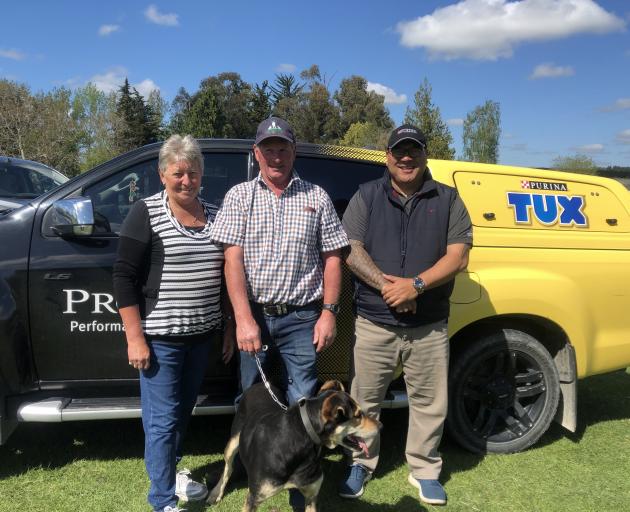 About 200 entries took part in the two-day event on Ali Barrett (left) and Chris Calder’s Springbank Farm in Levels Valley. They are pictured with dog Tarn and Aaron Apii (right). PHOTO: SUPPLIED
Keen dog triallists from Marlborough to Southland descended on Springbank Farm in Levels Valley, near Pleasant Point, recently for the Tux Handy Dog and Tux Yarding Challenges, as part of the national series for both events.

The Levels Collie Club, in conjunction with the Hilton-Gapes Valley Collie Club and Mt Nessing Collie Club, hosted the event on September 9 and 10. Blue skies and a lack of wind made the event a pleasant watch for spectators in great conditions for competitors.

It was the third year the event had been held on Chris Calder and fiancee Ali Barrett’s farm, where a special competition area had been built to run the competitions together.

Mr Calder said he took down a fence and some pine trees, making the yard more user-friendly.

Mr Ashworth thought it was fantastic to see so many young competitors having their first crack at the event and really enjoying it.

Loyal local and dog trialling legend Hugh Weir, based in Methven, said he attended his first dog trial with heading dog Bruce at Paerau in Central Otago when he was 17 years old and now, at 88, had no intention to stop heading down to watch.

“I have always had dogs and did fairly well for a few years, but I think it is me that is on the downhill now rather than the dogs. It has been great to watch.”

Open handy dog competitors to qualify were John Walls and Nate, along with Wendy Dalziel and Hills and Vanessa Bragan and Mint. They all go through to the South Island final at the West Otago Show in Tapanui on November 20 and 21.

Robin McKenzie and Ken, of Clinton, won the maiden and open trophies.

This year the proceeds, about $2500, went to the Westpac Rescue Helicopter fund.