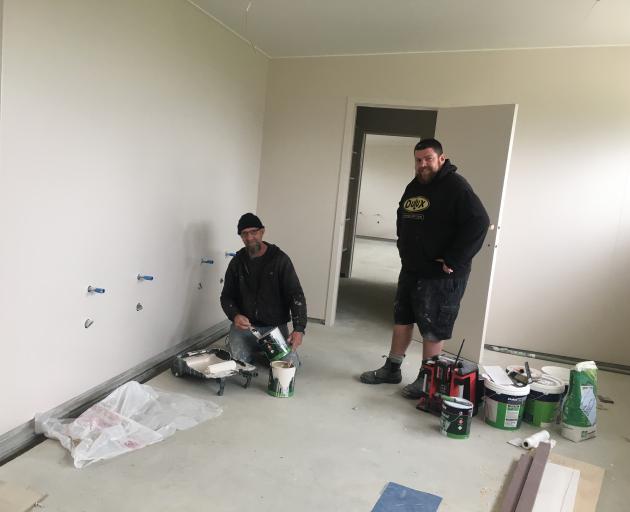 Michael Beer (left) and Nathan Kitto, of Southern Decorating, bring colour to the walls in the new toilet facilities at the Southern Field Days site in Waimumu. Photo: Alice Scott
Losing mobile phones to the deep, smelly depths of a Portaloo will be no more at next year's Southern Field Days with construction progressing for quite possibly the country's largest toilet block.

Southern Field Days event organiser Sharon Paterson said the planning and construction of next year's February Field Days in Waimumu near Gore was well under way and that included the building of a 100sq m toilet facility, costing the organisation in excess of $500,000, with the support of the Community Trust South.

''Our commitment to a building of this scale is indicative of the confidence from our vendors and the New Zealand public in our event,'' Mrs Paterson said.

''I would say we lose about five mobile phones down a Portaloo every year, so I am sure many will appreciate the effort we've gone to,'' she said.

Mrs Paterson said Southern Field Days started out as a small grassroots event back in 1982 and every year it had grown in both land area and people through the gates. There were more than 750 sites already booked, with only a few vacant spots left.

There was ''a waiting list for the premium sites, and we're still only in October''.

Next year's on-site entertainment has been confirmed with an international rugby team taking on a local squad on the Thursday of the three-day event.

As this story went to print, the embargoed information about the rugby match was yet to be released ''but I can assure the public it will be a great game to watch'', Mrs Paterson said.