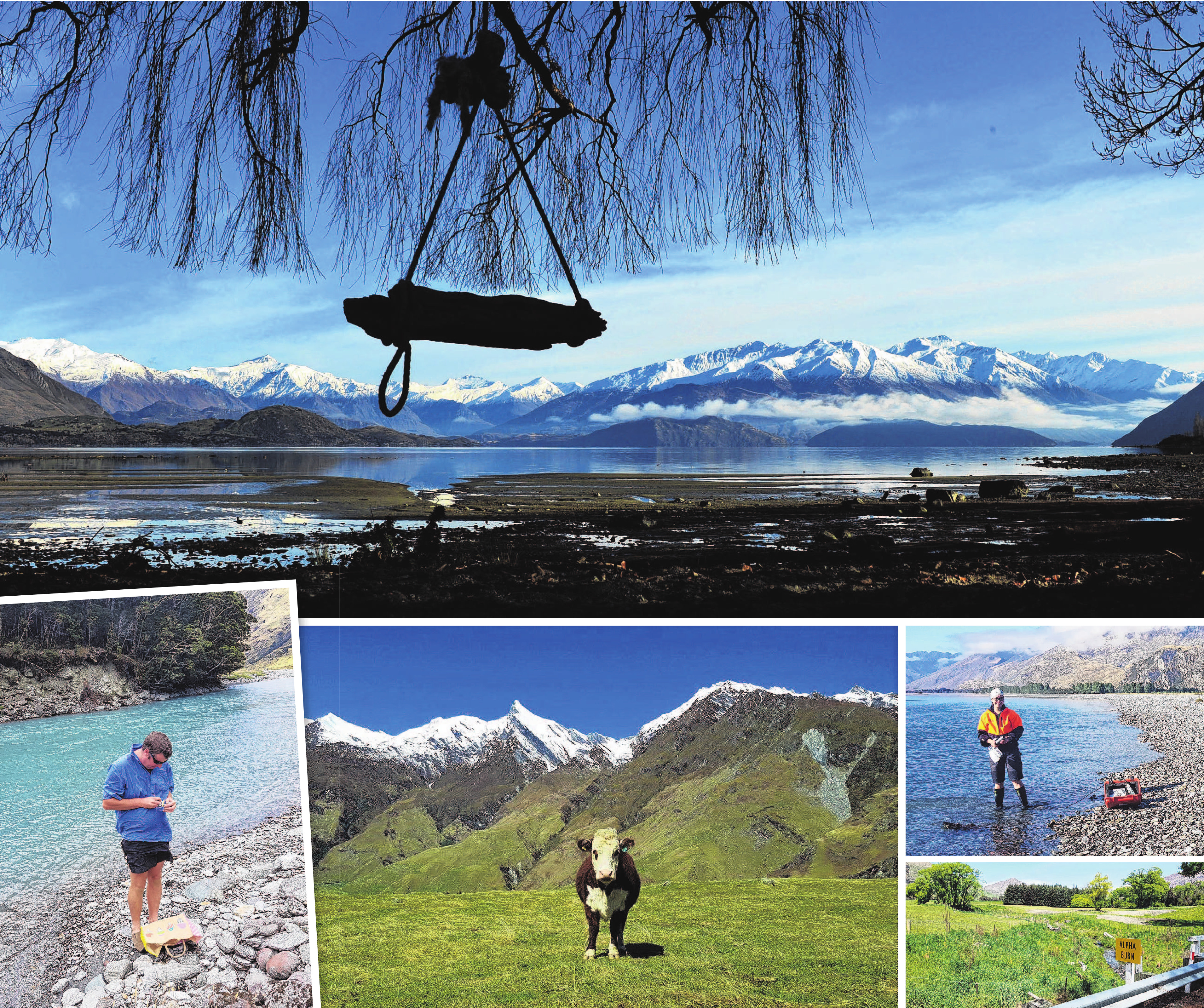 The Wanaka Catchment Group is focused on looking after and respecting its environment; pictured Randall Aspinall of Mt Aspiring Station, and Otago Regional Council senior environmental officer Melanie Heather does some water sampling. PHOTOS: STEPHEN JAQUIERY/CHRIS ARBUCKLE MONTAGE: MAT PATCHETT
A group of farmers in the Wanaka area have taken a proactive approach to water quality in  their patch and  are now moving into stage 2 of  their catchment group project. Sally Rae reports.

"Relationships and people. I don’t know why when it comes to the environment, we always forget that. I can wax on about science up to my wazoo — this thing is purely about people, relationships and trust."

Environmental consultant Chris Arbuckle is referring to the Wanaka Catchment Group, set up three years ago and comprising 15 large properties that drain into or are upstream of Lake Wanaka.

Representing 95% of the farmed catchment, they range from fourth generation — such as the Aspinall family at Mt Aspiring Station — to overseas owners and everything in between.

Those on the land are farming in the proverbial fishbowl that is the recreational hot spot of the Upper Clutha — as Mt Burke Station manager Grant Ruddenklau succinctly puts it: "we’re not hidden up a gully".

It is estimated more than 80,000 tourists and visitors pass over Mt Aspiring Station and Alpha Burn Station every year, while there were about 500 boats a day on the water at Stevensons Arm, accessed through Mt Burke Station, for two months every summer.

All group members have similar farming systems — sheep, cattle and deer — and all had similar challenges with water quality. But most of the discussion around water was coloured by emotion and linking that with science knowledge and people made a difference, Mr Arbuckle said.

"Fundamentally, the most important element is the person or people, the family on the farm."

The group’s origins were from discussions around the Otago Regional Council’s plan 6A change for rural water quality; Jonathan Wallis, from Minaret Station, and Randall Aspinall set up a group representing landowners around Hawea, Wanaka and Wakatipu.

Mr Arbuckle was contracted to do those plans and that led to Mr Ruddenklau driving the idea of forming a catchment group. Buy-in was good; about 13 farms signed up virtually immediately, and originally the focus was all about the quality of water flowing into Lake Wanaka.

The group finished stage 1 — doing level 3 land environment plans on all of the properties — at the beginning of the year, and was now looking at moving into stage 2, which included getting the projects done that were identified through the farm plans, including planting, fencing and management changes.

It was also working with the ORC on a Good Water Otago water testing programme, doing water sampling to highlight the effect the farm systems were having on streams at a detailed level; that had been very beneficial to educate people and create behaviour change, Mr Aspinall said.

The focus was now on making improvements on their own properties, encouraging positive attitude change and educating the people involved in enacting the changes, such as farm staff.

While the group tended to keep a low profile, it had engaged with the wider community and various stakeholders to let them know what it was trying to achieve — and that it was making progress.

"We are in an area with large farms, a lot of water and some very traditional farming systems. We are very aware that this is a long-term process. However, we are comfortable with that as we feel steady change is enduring change," he said.

Scott and Rachel Paterson manage Mt Albert Station, a 12,500ha property at the headwaters of Lake Wanaka near Makarora. Prior to the establishment of the group, Mrs Paterson acknowledged they "didn’t know where to head".

"We had to start somewhere. No-one knew where they were heading. This [the group] gave us the opportunity to be able to start it and go in the right direction. These guys came in, pointed us in the direction of what was required and how to do it."

With two main rivers running through their property, they were endeavouring to restrict movement of cattle in those waterways; they had fenced off significant areas and continued to do so.

It was not just about abiding by the rules, but also for the purification of the water.

"Stock appreciate clean, fresh water too, as well as us. We have to respect that as well. To perform and produce," she said.

Mr Ruddenklau said the project had been fully farmer funded to this point, no external funding having been obtained. It had cost $6000 a property so far to get stage 1 done. The idea that it was formed and funded by farmers was "quite important".

Part of stage 2 was to track and encourage the implementation of farm environment plans. It was also around interpreting and understanding new Government legislation around freshwater and how it was going to affect the properties. The group would look at attracting external funding to carry out tangible on-the-ground projects that produced direct environmental benefits.

The project had been about education — "It’s all about educating farmers, not lecturing them. That’s the big difference to the way this operates" — and they were fortunate to have Mr Arbuckle’s involvement and knowledge, learning about the effects they were creating, he said.

While a lot of projects that sound good could be ticked off quickly if needed, Mr Aspinall questioned whether all of them actually produced environmental benefits and created longer-term change. Taking a step today, and building on it over the months and years with a focus on educating and changing attitudes, meant it was more enduring.

Asked what the group’s vision was, Mr Aspinall said the group’s members all had their own visions and drivers. "The thing in common ... everyone wants to or is aware that we have to be better at looking after the environment."

"And respecting it," Mrs Paterson added.

Mr Ruddenklau saw the biggest change being achieved through educating those creating the effects, rather than through legislation.

Farmers had always been very adaptive to change and, given time, they would change. Amid the national debate around water, they were getting on and producing food to the best of their ability and with the environment in mind, he said.

There were things on-farm that needed to be tidied up, as most urban areas and industries also had, Mr Aspinall added. "We’re making an effort; we’re doing what we can."

When it came to the future of farming, Mr Ruddenklau was upbeat. Even after 40 years, he still loved getting up in the morning "and going out farming" and that echoed the views of most farmers, who wouldn’t trade their lifestyle for anything.

"I still think we are the best food producers in the world," he said.

"And the most passionate," Mrs Paterson added.

But it was the public negativity that was tiring farmers, as they agreed it would be "nice to get up in the morning and just go farming".

In the Wanaka area, there was a relatively balanced discussion, whether it involved developers, the farming community, the tourism industry or urban areas. Once you got talking to other groups, it was evident that all wanted the same thing. There would always be a difference of opinion, but most were interested to hear about what you were trying to do, Mr Ruddenklau said.

The Wanaka Catchment Group was partnering with local groups and, while it might sound like a cliche, "everyone wants similar outcomes", Mr Aspinall said.

"They just need to be rest-assured change [in the farming sector] is happening through education," Mr Ruddenklau added.

For Mr Arbuckle personally, his involvement with the project was linked to some self-development goals. While working in government, he was involved in a research project around collaborative management and working with communities on water.

The Wanaka project was in the "trying-to-do-things-differently bucket", while it was also in an area that was very important to him. His father was a deer culler and he lived up the Matukituki Valley as a boy.

Having moved back to the Wanaka area in recent times, he was now "taking all the stuff I know about water science and policy and coming back to doing stuff that matters", while returning to a place where his heart was.

Trust was at the core of the catchment group, which was made up of a "fabulous" group of people. Spending time with them meant he gained a greater understanding of their challenges.

The project was in various phases for each property, but they all had the same challenges — "just in different places and different scales" — and everyone was committed to doing their own projects, Mr Arbuckle said.

Many high country farmers felt their farm systems were low-input and, in a lot of ways, they were. But they all had cattle and creeks and "hotspots" and, for Lake Wanaka, "that’s the important stuff".