‘They produce, simple as that’

Min Bain, of Waitahuna West, inspects rams at Blair and Sally Robertson’s property during a recent stud Romney breeders and stud stock agents’ reunion. Photos: Sally Rae
"We wouldn’t be farming today if it wasn’t for the Romneys."

West Otago farmer Blair Robertson is a passionate advocate for the breed, saying "they produce,  simple as that".

Mr Robertson and his wife Sally’s Merrydowns stud at Waikoikoi was one of three properties visited during a bus tour last week, as part of a reunion of  Romney stud breeders and stud stock agents.

Among the impressive line-up of sheep on display were some bearing the Merryvale prefix, which has been revived by Mr and Mrs Robertson’s son Jack.

Jack (15), a pupil at John McGlashan College in Dunedin, has continued his family’s long-standing love for the Romney breed. 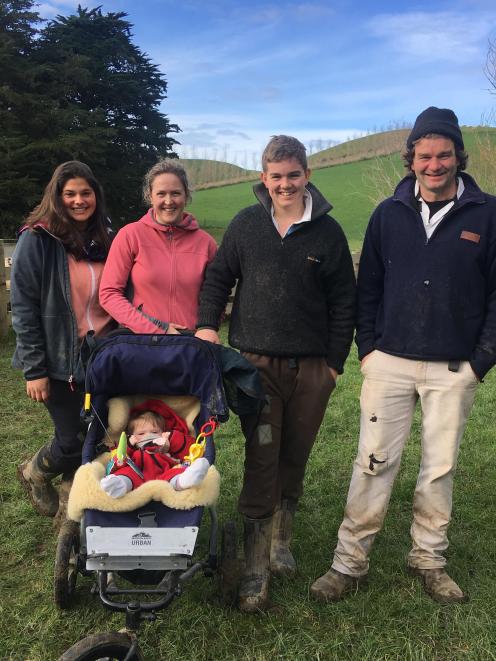 He now had about 90-odd ewes and among the top line-up of ram hoggets on display, about 20-odd belonged to him. It was probably the best crop of rams he had since he revived the stud in 2015, he said.

He expected his future plans would involve farming and after leaving school, he might head north to "get some new ideas from some other farms" and eventually return to the home farm.

his grandfather Graham, and his father were all stud breeders.Mr Robertson said the Romneys being run at Merrydowns were "totally different" from the sheep that were there in the 1960s — "like a different breed".

The reunion was initially the idea of Ken Bain, now retired at Millers Flat, who thought a get-together should be held. Then he talked to retired agent Murray Sheppard, who suggested stud stock agents — who played a key part in the industry — should be included.

It included the bus tour, which also visited the Grant brothers’ large-scale commercial operation and Hamish and Miriam MacKay’s Braebank stud, and a dinner.

It was attended by descendants of the very early stud breeders, including Raymond and Susie Matthews, and John and Trish Donald, all of the Wairarapa.

Speaking at the dinner, Gore Mayor Tracy Hicks said it was  appropriate the reunion was being held in Gore, a town that was "built on the back" of Romneys.It was a small town with a big heart, real capability,  a can-do attitude and great people, Mr Hicks said.

Much of that went back to the traditions from the early days of farming and was very much built around Romneys.

Gore was a farming community, "our life blood is farming". The world was changing — the new milk factory being built at McNab was an example of that, but Romney sheep continued to graze in paddocks right alongside it, he said.

breed had a "fantastic" future.

They were a productive sheep and, with the likes of the huge compliance issues around dairy farming, the opportunities were "out there".

Mr Wyeth said had been passionate about the breed since a young age and had grown up in the industry.

Today’s Romney industry was production-driven rather than focused on shows or stud sales; it was commercially driven and focused, he said.

A game changer had been technology, innovation and recording. Today’s breeders embraced technology and had moved with the times and the breed could compete with other genetics in the industry.

Henry McFadzien, one of the reunion organising committee members, who also did his legendary address to the swede, said the stud breeding world was very family-orientated and many staunch friendships had been forged.

She was a long-serving servant of the club in the days long before Facebook,  her bulletins and newsletters to club members keeping them up to date with what was happening.

They were not the first sheep imported into New Zealand — 60,000 merinos had earlier arrived — but they quickly made a mark.

Early breeders were "very forceful gentlemen" and a lot of sheep were sold on their personalities, forthrightness and, of course, the ability of the Romney to adapt to New Zealand’s pastoral farming scene. They had made their stamp on the sheep breeding industry.