1 Comment
The Government has today committed a further $4 million in relief funding to support Canterbury farmers mopping up from the "200-year flood" of more than three weeks ago.

Prime Minister Jacinda Ardern is spending the day in Mid Canterbury, which was devastated by torrential, relentless rain that caused widespread damage to bridges, roads, farms, houses and garages, and resulted in military intervention and hundreds of evacuations in late May.

Ardern this morning met district mayors and recovery managers at the Ashburton Bridge, which slumped in the rampaging floodwaters.

After a closed-doors meeting at Ashburton District Council, she is expected to visit a farm badly damaged by floodwaters in late May which now face years of work to get it back on track.

Ardern this afternoon announced the additional $4m of funding – with an extra $100,000 going into the Mayoral Relief Fund to support Canterbury communities.

"Our Canterbury farmers are dealing with a massive recovery effort following the recent floods and facing significant costs that aren't covered by insurance," Ardern said.

"The flooding has caused widespread and significant damage across a number of districts and recovery efforts are ongoing and considerable.

"It's clear that extra funding is needed to relieve pressure on farmers who have also been battling drought." 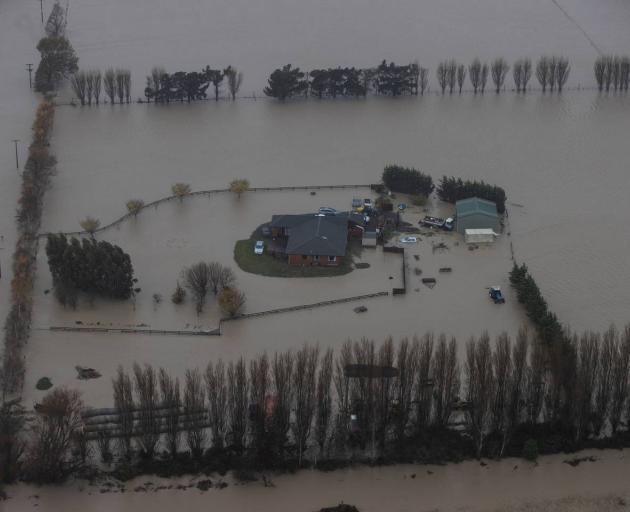 Farms in the region were badly affected by flooding. Photo: George Heard
Ardern says the new funding will help ensure farmers are supported and can "get on with the job of fixing their farms" and getting their farming operations underway again.

"On the ground assessments of farm damage are showing the impacts on some rural properties have been severe, some of which are likely to be uninsurable," Ardern said.

The funding is in addition to the $500,000 committed by the Ministry for Primary Industries (MPI) on June 1.

"And we will continue to work closely with Federated Farmers, Rural Support Trusts, councils and industry organisations to support farmers with their recovery," she said.

Acting Agriculture Minister Meka Whaitiri said the region's farmers and their communities have a big clean-up job ahead of them.

"The new funding we've announced today should help towards paving the way for ongoing recovery efforts in Canterbury. The Government remains committed to helping them get through," Whaitiri said.

Acting Minister for Emergency Management Kris Faafoi said the additional $100,000 to the Mayoral Relief Fund follows an earlier contribution of $100,000 announced on May 31. It brings the total now committed by the Government to assist with the flood recovery in Canterbury to more than $5m.

"This funding will help meet the ongoing needs of individuals and families, community organisations, and marae affected by the flooding," Faafoi said.

The funds will be provided to the Mayoral Relief Fund to be disbursed across the Canterbury region and is in addition to other support that people may be eligible for through the Ministry of Social Development (MSD) and MPI. In addition, Enhanced Taskforce Green funding of $500,000 from the Ministry of Social Development, which was announced earlier this month, has been activated to help with the clean-up.

She was critical of an "inconsequential" $500,000 which the Government announced on June 1 would be for "flood recovery measures".

"Farmers have now spent three weeks working themselves to the bone to clear up flood damage – much of which could have been avoided had ECan, the regional council, done its job and kept waterways clear of shingle," Grigg said earlier.

"To be clear, farmers are not looking for handouts - but much of the damage has occurred in areas where they have been paying rates to ECan to maintain and clear waterways and, in many places, this work has not been carried out for years."

Is that it?, cyclists get more than flood ravaged community's....