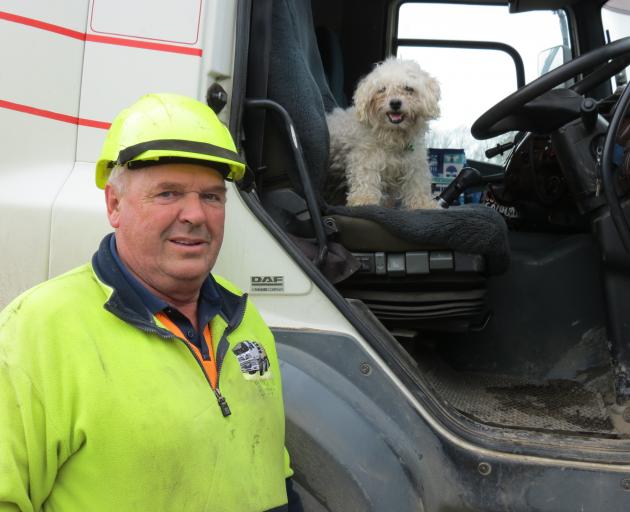 Logging truck driver Barry Scott, partner of Pam Bennett, says their 12-year-old Shih Tzu-Maltese cross dog Bailey has been trucking all his life. Mr Scott said Bailey rode with him all the time and was pretty relaxed about being on the road. He had a bed behind the seat in the cab. "He gets out when we stop and has never run off.'' Photos: Yvonne O'Hara
Encouraging more women to become truck drivers to address the road transport industry's shortage and to replace an ageing workforce will be discussed at the Road Transport Forum conference in Dunedin on September 26 and 27. 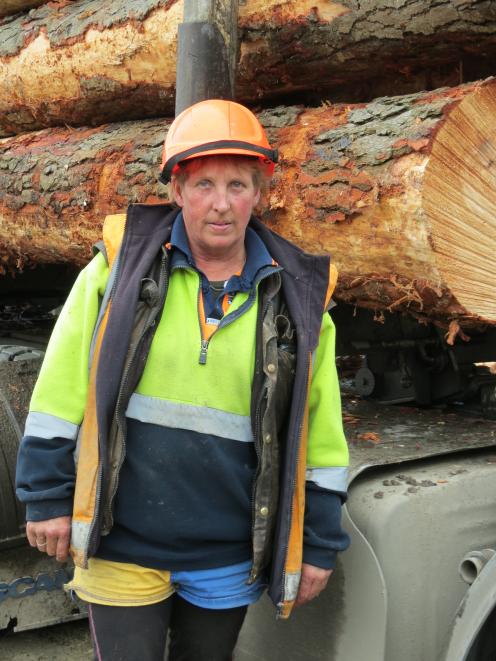 Pam Bennett, of Invercargill, drives a log truck for her living, and was in Ettrick to pick up a load of logs last week. She has been driving for Sanson Haulage Ltd for about 18 months.
One of the next steps in the strategy was to ensure job advertisements for truck drivers were as attractive as possible to both men and women.

''We will be looking at how to interview and advertise a position which is more conducive to women looking for a job,'' she said.

Employers had to realise women viewed what was mentioned as absolute, so employers should not list all the skills required, but instead give an overview of the position.

It was important to mention training as it indicated the company was willing to promote within the job.

Another key issue deterring some women from taking to the open road was the lack of clean, well-lit and convenient toilet facilities.

''Women are more discerning [than men],'' she said.

She said if there were toilets near fuel stops, they were often only for men, in the middle of nowhere and not open after hours, and that could be difficult as some truck drivers were required to make deliveries throughout the night or early in the morning.

Pam Bennett, of Invercargill, and her partner Barry Scott, both drive trucks for Sanson Haulage Ltd, of Riversdale.

Ms Bennett said finding suitable facilities was not too much of a problem in the region.

She said she had had her full licences since she was 18 and was driving silage trucks before moving to a logging truck about 18 months ago.

''They needed a log driver and I said I wanted to do it,'' Ms Bennett said.

''There are three other women in Southland who drive trucks that I know of.''

She said women tended to be easier on the equipment.

''You get a fair bit of push behind you, and you have to know how to go around corners.''

Fonterra Edendale and Stirling depot manager Dean Morrison said on the road it was the same for any motorist who needed to use public facilities - some were good and some not so much.

''Finding a park for a 20m truck is obviously more difficult than your average car so often requires more of a walk or limits your choice of facilities.''