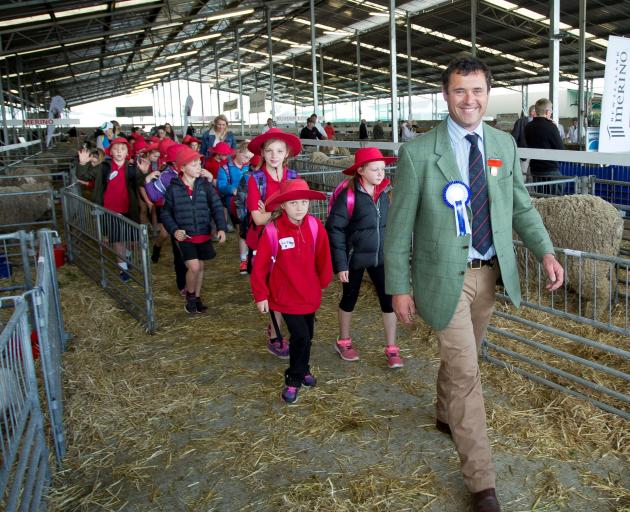 He is keen to promote wool and encourage more young people to get involved as he looks ahead to the rebranded New Zealand Agricultural Show in November.

''It's been a great thing for me to be involved in and I would like to see a lot more young people involved.

''There's a lot of young people out there with some fantastic ideas so we need to get them engaged. I don't want people to think they have to be old to get involved.''

Mr Black, a former wool auctioneer, runs a South Canterbury-based business in the wool industry and is organising a wool auction at the show for the third year running, while North Canterbury farmer Bev Forrester will be back with a wool fashion show.

''Farmers don't often get to a wool auction and we've had a really positive response, especially with the fine wool.

''A lot of people now hold their wool back to put it up at the show.''

Mr Black said the wool fashion show was first held last year and there were plans to ''ramp it up'' this year in a bid to promote wool as a sustainable product.

''Last year it went really well. Bev Forrester does a fantastic job and she will be showcasing her own products and those of others.

''With around 100,000 people going through the gate over the three days, what better opportunity to promote wool?

''In my mind, with plastics in our waterways and landfills, it seems to be a major problem, whereas wool is biodegradable, sustainable and it ticks a lot of those boxes.''

Mr Black said he hoped to have some of his own products, including wool pillows, on display.

Since being elected president this year, Mr Black has been ''clocking up the miles'' to make meetings in Christchurch, but said the show's success was due to ''a great committee and all the sections run really well, so taking over hasn't been too major''.

He said Canterbury Agricultural Park would become a busy place over the coming weeks, with the ''Spring into Action'' horse competition on September 23, before show preparations got into full swing.