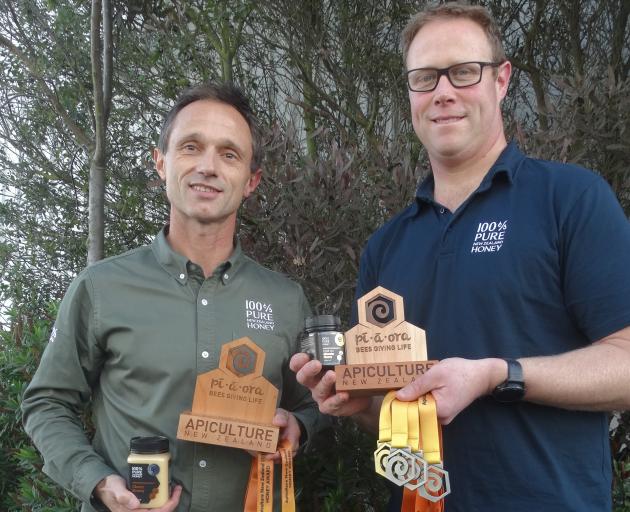 Sean Goodwin (left) and Jarved Allan display the trophies won at the annual Apiculture NZ Honey Awards. Photos: Chris Tobin
A Timaru honey company does not own any hives but it is the country's best producer of the highly valued manuka honey.

''It's reinforced we're on the right track processing honey and it will boost our markets overseas,'' chief executive Sean Goodwin, who is also the deputy chairman of Apiculture NZ, said.

''We've gone to our distributors who are excited about our success. It'll give us another lift.''

The company, which exports to more than 20 countries, has a strong presence in Asia and has a core group of 50 honey suppliers from around the country.

If it was a bad season they could accept honey from up to 100.

''We like to deal with independent beekeepers and some of them have been around for generations. 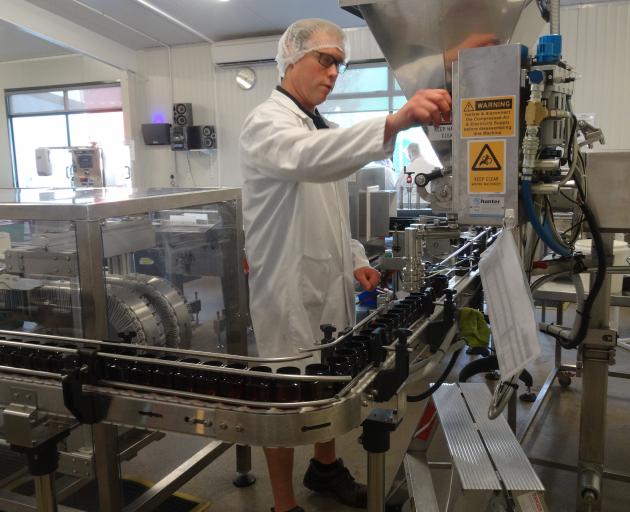 "Honey Master'' Jarved Allan works on another batch.
''I buy honey from beekeepers the length and breadth of New Zealand, process it here then we export which is why we have a lack of visibility in New Zealand.''

''It's lucrative but with that comes obligations that it is top quality.

''We've expanded the plant here over the last couple of years and we're looking for opportunities as well.

''We've recently taken on new markets in the UK and Europe via Amazon.

''We're also looking to become visible to the tourist market in New Zealand.''

The best areas for manuka were Northland, the East Coast and Taranaki and good quality supplies came also from North Canterbury.

Operations manager Jarved Allan, also known as the ''Honey Master,'' said other companies had their own hives.

''The beauty of not having hives is that we can pick and choose.''

Mr Allan analyses honey blends and monitors the quality of inwards honey and distribution of goods for export.

He said quite a bit of effort was put into deciding which categories to enter at the national awards.

While happy with all the other prizes, Mr Allan said being named the best for manuka honey was particularly satisfying

The company was established by Steve Lyttle and Carolyn Ball in the late 1990s, and employs 12 staff at its Washdyke premises.