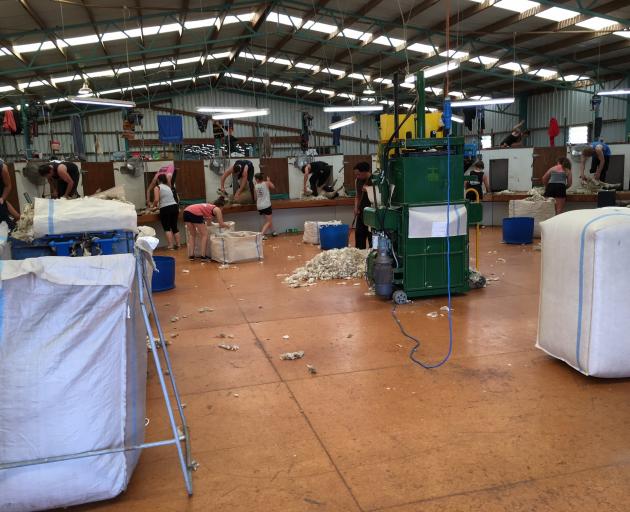 A shearing gang at Strathview Station, Otago. Photo: Brent Melville
Primary ITO has rolled out a trifecta of micro-credentials aimed at ensuring a supply of shearers and wool handlers for the next generation.

The range of micro-credentials in wool harvesting range from an introduction to shearing through to gaining ''learner credentials'' in wool handling and shearing.

''The courses are bite-sized pieces of learning, to recognise or teach specific skills for the workplace on the job in a short time,'' Primary ITO chief executive Linda Sissons said.

''What makes the issue so pressing, and why the wool industry is one of the first to have micro-credentials released, is that right now there are no recognised industry qualifications available in New Zealand for shearers and wool handlers.''

''The industry has had limited training for a while now. That, combined with the drain on our top shearers and wool handlers from overseas and with shearing crews getting older, we need young people to come in and take their place.

''The local industry already has a heavy reliance on overseas, and particularly Welsh, shearers. We do need to be sure we have suitably trained staff to support farmers' needs when they want to shear.''

Dr Sissons said the micro-credentials were a game-changer for the primary industries, describing them as ''short, sharp pieces of learning''.

They were, however, officially recognised and overseen by New Zealand's education system.

''The industry are notoriously slow adopters of new ideas, but we've had good steady adoption of the online modules by our members and feedback has been excellent to date. ''

Dr Sissons said the real shift was the focus on skills rather than big up-front qualifications.

''A micro-credential puts the emphasis on 'just in time' learning, rather than a lengthy 'just in case' qualification.''

At the top end of the spectrum, Primary ITO's new micro-credential in biosecurity is at Level 5 on the New Zealand Qualifications Framework and pitched at agribusiness managers and owners.

The wool courses are at Level 2, and take about four weeks of total learning, practising and assessment.

Mr Barrowcliffe said the shorter training timeframes catered well to the transient nature of the industry, meaning students could start and complete the credential within one season.

''The implication is that businesses can bring on new workers and ensure they develop essential skills for the woolshed before investing in further training,'' Dr Sissons said.

Primary ITO was also in the process of developing a full suite of wool harvesting programmes, in addition to the micro-credentials, expected to be launched next year.