Canines have nose for the job 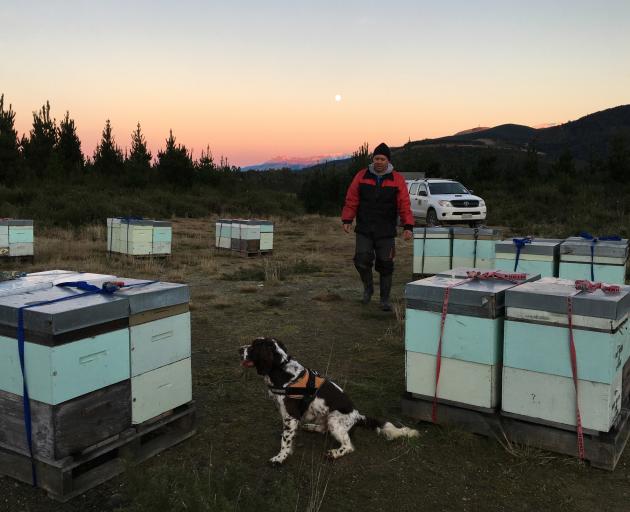 Rene Gloor, of Rene Gloor Canine Ltd, Dunedin, has trained dogs to detect biosecurity risks through odour. Flynn is one of several dogs he intends to use as part of the Southern Beekeepers Discussion Group's Sustainable Farming Fund project to develop tools to detect American foulbrood. Photo: Gloor
A request from beekeepers in Canterbury led a Dunedin dog trainer to become a key element in the fight against the devastating bee disease American foulbrood.

Rene Gloor, of Rene Gloor Canine Ltd, is originally from Switzerland and has spent the past 30 years training dogs to detect many odours.

His dogs were used to detect biosecurity risks, including fruit, plants, meat, seeds, eggs and reptiles, for the Ministry of Primary Industries.

Since leaving MPI, he has set up his own business and worked in Taiwan, Korea and other Asian countries for the past eight years.

''I spend 10 months a year overseas and have come back to source more dogs,'' he said.

His dogs are rescues or donated.

''Several of my dogs were from the SPCA or dog rescues and some of them might have ended up dead.

''Some of them had horrendous lives but now they are full of energy, well-trained, enthusiastic, with nice homes and a job.''

He said a beekeeper from Canterbury had asked him if a dog could be taught to detect AFB.

''Initially it was quite a challenge but they were trained to be able to detect the pre-clinical disease.''

Mr Gloor said his dogs had an 80% to 95% success rate, and could check 500 to 600 hives at a time. The dogs' noses were so sensitive they could detect the odour months after the infected hive had been removed, giving a false positive.

His dogs are now working throughout the country.