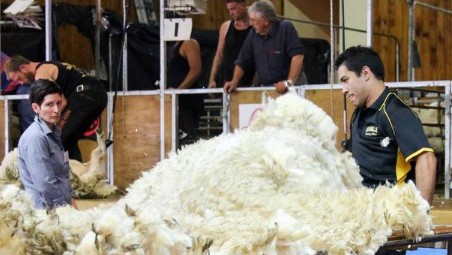 World champion woolhandler Joel Henare wins his 9th New Zealand Woolhandler of the Year title at Balclutha on Saturday - the 99th win of his Open-class career. Photo: NZME
Reigning Golden Shears champions Rowland Smith and Joel Henare loom as possibly the hottest favourites to win again this year after dominating the major events at the 58th Otago Shearing and woolhandling championships in Balclutha.

The two young dads have each been competing in the top class since their teens, and in The Balclutha Memorial Town Hall on Saturday 31-year-old Smith blitzed even reigning World champion and New Zealand teammate John Kirkpatrick to win the Otago Open shearing title and head New Zealand to a test-match win over Wales, while Henare, 26, won both the New Zealand Woolhandler of the Year and Southern Circuit woolhandling titles.

Smith's Otago championships was his 8th in a row in the four weeks since his last blemish, when he failed to qualify for the final at the Tauranga show on January 14. But he's had 31 wins in finals in a row in New Zealand since he was fourth at the Rotorua A and P Show in January last year.

The class showed in Saturday's two 20-sheep events, Smith beating next-man-off and fellow Hawke's Bay shearer Kirkpatrick by over 45 seconds in the Open final and more than a sheep in the test match in which the black-singlet pair beat the Wales team of Matthew Evans and Alun Lloyd Jones by a wide margin of 15.858pts to go 2-0 up in the four-match CP Wool Shearing Series.

In the Open final his quality was bettered only by third placegetter and title defender Nathan Stratford of, Invercargill, but he still Smith had a winning margin of 3.2155pts, while in the test he had the best quality points to beat Kirkpatrick by more than 4pts overall.

In his 12th season in the top class, Henare's wins took him to 99 Open grade wins, the century looming at next weekend's Southern Shears in Gore. It was his 9th NZ Woolhandler of the Year title, and fourth in a row, his 15 wins since the start of last year include his second World individual title and at the GoldenShears in Masterton on March 1-3 he will be going for a record-equalling 6th Golden Shears Open woolhandling title.

In other shearing events, well-travelled Gore-based Lionel Taumata, from Taumarunui, returned to winning form after three second placings to win his fourth Senior shearing title of the season, Gwydion Davies, from Wales, claimed the Intermediate title and became the first overseas shearer to win at Balclutha since 2010, and in the Junior final Brayden Clifford, of Gore, had the biggest of his four wins to date.

It was the time for young and up-and-coming woolhandlers to make their mark as the shears opened on Friday.

The busiest was Gore's Sharon Tuhakaraina, reaching three finals. She won the South Island Senior woolhandling circuit final, took to the handpiece to finish fifth in the Junior shearing final and qualified for the Woolhandler of the Year Senior final in which she was runner-up on Saturday to Krystal Gulliver, also of Gore.

Waikato woolhandler Tyler Hira, from Onewhero, started her fourth trip to the South Island this season by winning the Otago Junior final, after just scraping into the semi-final as ninth of nine qualifiers.

he win goes with the New Zealand Spring Shears title she won at Waimate in October, and a Southland double of a longwool title at Lumsden and a New Zealand crossbred lambs title at Winton on successive days last month.

On Friday she had to settle for second place in the South Island Circuit Junior final, which provided the first win for Krome Elers, of Mataura and brother of Senior final runner-up Nova Kumeroa-Elers.

RESULTS from the 58th Otago shearing and woolhandling championships on Friday and Saturday, February 9-10, 2018:
International: