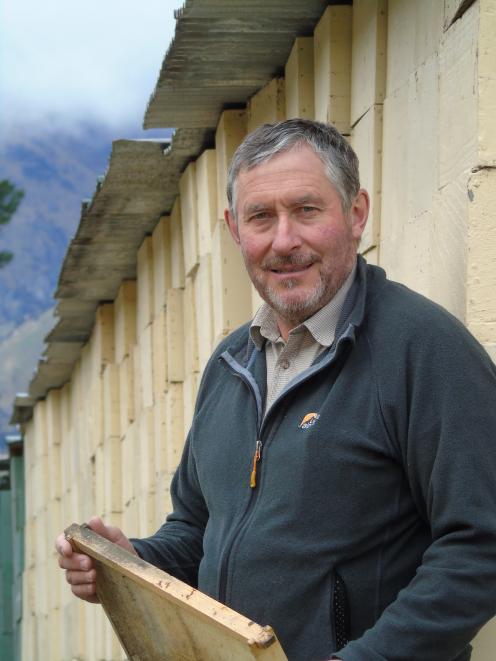 Commercial beekeeper Peter Ward, of Hawea Flat, is a member of the Southern Beekeepers Discussion Group, which has been given funding from the Sustainable Farming Fund to develop and trial new tools to detect bee disease American foulbrood. Photo: Simon Henderson
Beekeepers and dogs are joining forces to combat the devastating American foulbrood (AFB), the beekeeping industry's equivalent of foot-and-mouth disease.

If a new research project is successful, tools and tests may be developed that might eliminate the disease, commercial apiarist Peter Ward says.

The Southern Beekeepers Discussion Group has been given $143,000 from the Sustainable Farming Fund to develop and trial new tools to detect AFB.

Group spokesman Mr Ward, of Hawea Flat, said the group - as well as agricultural consultant John Scandrett and PGG Wrightson's Marie Casey, along with some North Island laboratories - would be developing hive sampling and testing techniques to detect the disease at a sub-clinical level during the three-year project.

''For the first time ever, we are looking at possibly eliminating AFB,'' Mr Ward said.

He said incidents of AFB were increasing by 15% a year due to industry intensification.

''It is a massive issue that New Zealand is facing.

''It is bigger than the varroa mite.''

He said the group would be using quantitative real-time PCR (Q-PCR) DNA testing techniques to develop the tools needed to identify the disease's presence before it is visible.

If successful, hive testing could be completed faster and more accurately, for both experienced commercial operators and less experienced hobbyists.

The AFB infection could remain at a sub-clinical level and dormant for a long time before it became visible.

Infected hives could be split or sold and spread the disease to other sites, or other bees would rob it and take it to their home hives, before the apiarist knew he had it.

Once it was visible, it was too late and the hive would have to be burned.

The group will be using several dogs trained by Rene Gloor, of Rene Gloor Canine Ltd, of Dunedin.

''They are able to detect pre-clinical AFB spores in a hive by the different odour,'' Mr Gloor said.

He recently went to an apiary in Cromwell and his dog indicated spores on a bare patch of land.

There had been an infected hive on the site 14 months earlier.

Sometimes bees clean up the infection themselves so it is no longer present, but is still dog-detectable.

Mr Ward said they hoped to have early results in the next six months and hoped to ''calibrate both dog and tests'' to ensure reliability.