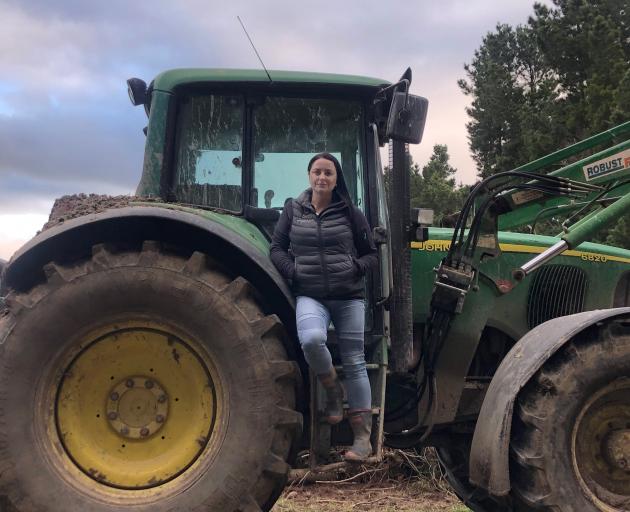 Waipounamu Contracting human resources manager Emily Hawker ponders the shortage of skilled workers for the upcoming harvest season. PHOTO: WAIPOUNAMU CONTRACTING
A Riversdale-based agricultural contracting business fears injuries and even fatalities could occur, in the worst case scenario, if it is unable to secure experienced staff for the summer harvest season.

Waipounamu Contracting usually employs between 15 and 20 workers from overseas for the season which generally runs from early November to late March.

It seemed unlikely it would be able to bring in those employees this year, all of whom had experience operating tractors or machinery, human resources manager Emily Hawker said.

The company, which services more than 420 farms in the Southland and West Otago area, submitted a request to the border exemption team to have eight highly skilled return employees come back.

It was rejected as they were not being classified as highly skilled, and Immigration New Zealand had said workers with the skills required could be obtained in New Zealand.

However, it had been advertising for staff since the beginning of April and no-one with the skills required had applied. Now, it was "literally drawing at straws", Mrs Hawker said.

That included pulling family members out of full-time employment and organising a "barbecue and beer" event at the Alhambra-Union Rugby Club in Dunedin on August 19 to help attract university students who had been raised on farms and had the necessary skills.

Despite publicity about that initiative, there had still not been any suitable applications.

It was also a work placement company for Telford, in the hope some of the training’s institute’s candidates from the six-week agricultural contracting course would "fill a gap", but that was not looking likely.

"We have no idea what we are going to do," she said.

Rural Contractors New Zealand chief executive Roger Parton said there would be a 32% downturn in activity, worth $65 million, without the annual national influx of highly skilled drivers and operators.

The effect would be the loss of nearly 28 million tonnes of production, valued at more than $110 million. A recent survey of members found 57 contractors urgently needed a total of 206 skilled operators.

Waipounamu Contracting’s biggest concern was about health and safety.

In a normal year, it had room for two or three inexperienced employees who shadowed a highly skilled operator.

This season, it was potentially having to employ 10 to 15 inexperienced operators which was "a recipe for disaster". It feared it was at risk of facing a "huge" loss of income and reputation as well as possible injuries or even fatalities, Mrs Hawker said.

While the company would love to have a full list of New Zealand residents to call from for each season to help with harvest, Riversdale was too small to accommodate that.

The company had approached the dealerships that supplied them with machinery to support letters to INZ explaining the health and safety risk that hiring inexperienced staff could pose to individuals and the public.

Mrs Hawker was "astounded" many people were not aware of the issue and she was concerned to see the West Indies, Bangladesh, Pakistan and Australia would tour New Zealand this summer for 37 days of cricket.

Businesses such as Waipounamu Contracting were providing 200 days of work supporting the agricultural sector which was "keeping New Zealand propped up at the moment".

The inability to get staff would also have "huge" flow-on effects in the local community, through the injection of wages spent in the area, she said.

In a statement made before the Government’s announcement that most of New Zealand would return to Alert Level 2 and Auckland to Level 3, Federated Farmers employment spokesman Chris Lewis said the situation had almost gone past critical now because farmers were on the cusp of spring activity and those seasonal workers needed to be on flights and into quarantine for two weeks. Exemptions had been allowed for workers laying synthetic tracks for horse racing, for the movie industry and others.

When contacted, an INZ spokeswoman said it understood the effect Covid-19 and the border restrictions were having on some sectors and employers.

The bar for being granted an exception was set high to help stop the spread of Covid-19 and help protect the health of people already in New Zealand.

In June, new immigration instructions came into effect which set out specific criteria for determining whether someone was an "other critical worker" and could be granted an exception.

A worker coming for less than six months might be considered an "other critical worker" if they had unique experience and technical or specialist skills not obtainable in New Zealand, or the person was undertaking a time-critical role essential for the delivery of an approved major infrastructure project, a government-approved event, an approved major government programme, an approved government-to-government agreement or had significant wider benefit to the national or regional economy. There were also criteria for workers coming for longer than six months.

In general, employers must consider the availability of New Zealanders for the work, and work visa applications would be subject to labour market tests.

INZ continued to listen to employers’ concerns, including the dairy and farming industry, she said.

A WorkSafe representative said, under the Health and Safety at Work Act 2015, it was the responsibility of a business to manage risk to workers.

WorkSafe recognised the pressures on both farmers and contractors and it urged both to fully analyse health, safety and wellbeing risks and then to manage those appropriately.

No apprenticeships? No on-job training offered? Just, we want - people ready to hit the ground running and we're not willing to put any effort into training them.

Fatalities should not occur. As an employer, one doesn't put people near jobs and equipment that they are not trained and skilled in. There is no excuse. The worst case therefore is no more likely to occur.

You reap what you sow!
Many farmers and contractors had decided it was easier to invest in a foreign workforce.

Are you telling me than NZrs are totally inept to be trained in these roles over all these years?

I am curious - what are the wages and conditions being offered? My experience of farm work taught me one thing: hard work does not pay.
Like the tourism industry, and the fruit industry, this business seems to run by employing backpackers - are they on comparatively low wages?
And they seem to want someone else to provide accommodation for their workers.
These businesses need to restructure, their customers need to pay more so that the business can operate in a sustainable way. Seasonal work needs to pay much better, they can't run by setting out to have cheap labour, they have to make it worth the worker's time and inconvenience.

As someone with links to this industry I will leave the appalling state of staff training and retention for another day but basically the industry reaps what it sows! There is a far far bigger issue at stake here which I believe most contractors have not considered and that is if one single staff member gets covid then their entire operation is stopped immediately! And may not be operating for the rest of the whole season! The government will not care if there was hay to be baled the next day and won’t care for machinery repayments if the business cannot operate. The industry should be demanding tighter borders rather than opening them. This virus has potential to sink any business no matter how large and the larger the business the more staff the bigger the risk.