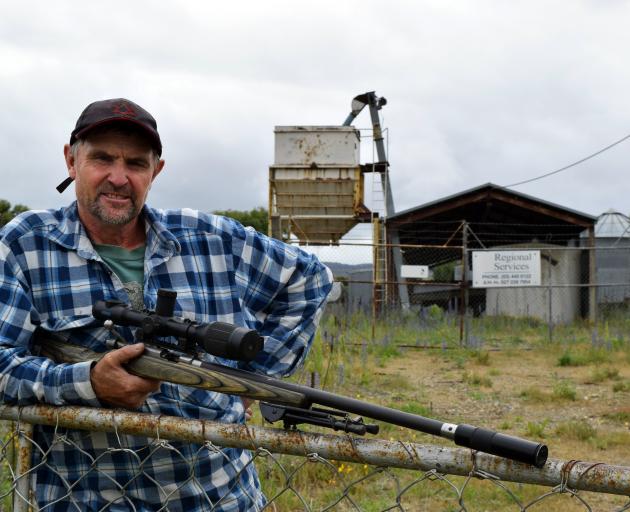 Rabbit shooter Robert Andrews wants the Otago Regional Council to maintain the oat-cooking and processing facility at Galloway, near Alexandra, and make it available to rabbit control contractors. PHOTO: SHAWN MCAVINUE
The language of Central Otago rabbit shooter Robert Andrews gets colourful when he talks about the Otago Regional Council and rabbit control.

One of his less evocative descriptions was "incompetent".

"The council have done more to hinder rabbit control in Central Otago than anyone else."

Mr Andrews is based in Galloway, near Alexandra, and has been contract shooting rabbits at night in Central Otago since 1990.

If rabbit poisoning was required, he asks a farmer to use a contractor licenced to do the work.

Mr Andrews is calling for the council to retain its oat cooking facility in Galloway.

Last month, the council resolved to dispose of all of its rabbit-control assets, such as carrot cutters and bait feeders, with the exception of its oat-cooking and processing facility.

A report with options for the Galloway facility including the value of the property, buildings and equipment would be considered before the end of the 2021-22 year.

Mr Andrews said at the facility oats could be cooked, put in molasses and dried to make a non-toxic bait to spread across farms for rabbits to feed on.

Then a similar bait was made at the facility, this time including poison, to spread across the same area. The method was successful when there was no grass available for rabbits to eat, he said.

Contractors were keen to use the facility but the council "incompetence" made it impossible to access it and get bait made and laid before the grass started growing again.

He knew of a contractor who had been given a quote from the council to supply bait made in the facility.

The contractor declined the quote because he estimated he could make the baits in the facility for no more than $1000 a tonne.

A rabbit-proof fence divides two farms in Central Otago. The farm on the left has had rabbit control done for the past 30 years and the farm on the right has not. PHOTO: SUPPLIED
After the quote was rejected, the council reduced it by $1000 a tonne, which was "frustrating" because the council should be supplying the bait at the lowest price possible to help reduce rabbit numbers, he said.

The facility should be put in the ownership of a trust for $1, with an agreement of the council maintaining it, he said.

The not-for-profit trust could then make the facility available to contractors to hire at cost of running it, so rabbits could be poisoned as cheaply as possible.

Mr Andrews believed the council had no right to sell the facility as it was once owned by the Rabbit Boards, which was funded by the Government and farmers.

"Farmers have already paid for it."

When Southern Rural Life visited the facility with Mr Andrews recently, several rabbits were running around it.

A council spokesman said the council supplied poisoned oats to the market in 2018, which were offered initially at cost and subsequently reduced to below cost.

The cost included raw materials, staff time and costs associated with running the facility, and was based on an assumption of processing and selling 15 tonnes of bait.

Following reluctance from the market to pay cost, the price was reduced further. Despite this, only 0.45 tonnes was sold and the council lost money from the process, he said.

"Contractors are encouraged to source poisoned bait at lower rates if they are able to do so."

Mr Andrews’ suggestion of the facility being owned by a trust and the council maintaining it, so contractors could hire it at cost could be a scenario the council could consider as part of that report.

"That option will need to be thoroughly analysed, as it involves council receiving no money from the sale of the asset and then retaining all the risk and cost of ownership.

"Council would need to understand the benefit of incurring those costs and risks on behalf of ratepayers."