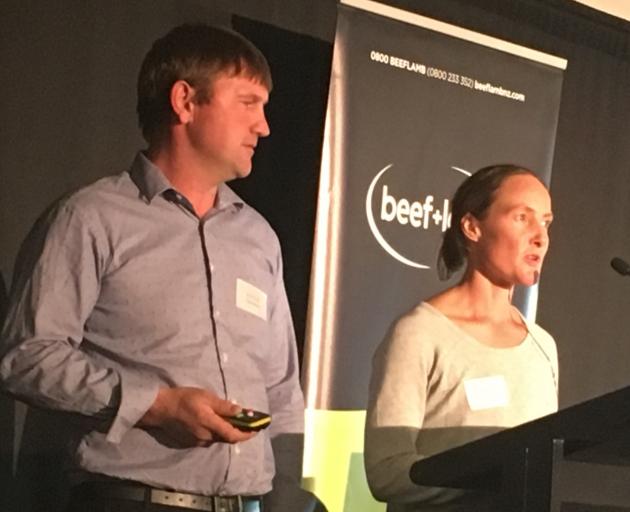 Culverden farmers Dan and Mandy Shand share their story of producing honey on the 7000ha Island Hills Station. Photo: David Hill
Producing honey can be a sweet addition to farm income, but there are some sticky regulations to comply with.

Before returning home to the family farm, Mrs Shand was a scuba diving instructor, while Mr Shand was a software developer.

Since taking over the business, the couple had won the 2012 Canterbury Ballance Farm Environment Supreme Award in recognition of their honey and tourism businesses, which complemented the sheep and beef operation, while Mr Shand was awarded a Nuffield Scholarship in 2014.

Mr Shand said one of the challenges had been the honey produced from pollinating kanuka plants being passed off as manuka honey, which was known for its healing qualities.

''Under the microscope the pollen is identical, so New Zealand was selling more manuka honey than we were actually producing.''

The Ministry of Primary Industries had since developed a DNA test to determine what was manuka honey.

Mr Shand said there were several things to consider when placing bee hives on the farm or for farmers considering accepting a bee keeper's hives, including where to place hives.

Was it for wintering, pollinating or collecting honey, how far were the hives away from the farm boundary, and could you work with your neighbour?

''I think of my bees as livestock, so you need to ask if your sheep could fly into your neighbour's property, would you be able to sleep at night?''

Mrs Shand said her role was to keep the paperwork up to date to meet the compliance needs, with audits twice a year.

''You really need to make sure your paperwork is up to scratch. It's not as easy as having the hives and connecting the hives.''

To simplify the tracing of honey back to hives and to locations, Mr Shand had used his software skills to develop a traceability programme, which he had turned into a small sideline business, and hoped to soon be able to make the information accessible to consumers.

''I spend a lot of my time thinking about what the future looks like, and being able to access information about where your honey comes from in real time is becoming increasingly important.''