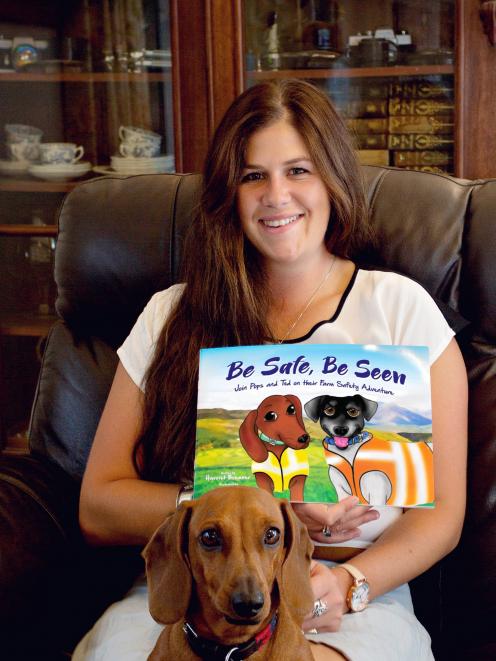 The issue is particularly poignant for the North Canterbury primary school teacher and fledgling author.

Her partner, James Hayman, was killed in a farm machinery accident in the Hakataramea Valley in January last year.

This month, Miss Bremner (29) launched a new picture book, Be Safe, Be Seen, which was aimed at keeping children safe on the farm.

It had always been a dream to have a business of her own and to write her own picture books, and it was a dream that she had discussed with Mr Hayman. She was ''super passionate'' about children's reading.

Following his death, she launched the brand Gurt and Pops and released her first children's book Bob 'n Pops, which was a tale of the special relationship between Mr Hayman, who was known as Bob, and the couple's miniature dachshund Poppy.

The tragedy had reinforced that life was very precious and people needed to make the most of every day and '' live life for the people that are missing out on it'', she said.

In addition to the books, Miss Bremner had started a grief blog and she was also writing a short novel about grief.

Her grief was ''definitely'' in her books and embarking on writing projects was something that felt like the right thing to do.

''I'm just kind of following my gut feeling,'' she said.

It had given her a focus and something to work towards and achieve. She felt Mr Hayman would be proud of her.

In Be Safe, Be Seen, Poppy represents children in the book by taking on the challenges of keeping safe on the farm as a little dog.

Miss Bremner hoped children would heed the safety messages in the book, and that families reading it to their children would also be reminded to make safe choices at work every day.

She wanted people having conversations about farm safety and talking to children about how to be safe when they were around vehicles, machinery and generally being in the outdoors.

She wanted adults to be aware of what it was like to be children in those situations, and for children to have language that they could express. The book talked about children switching on their ''think safe brain''.

She believed there was sometimes a perception that children might put on a high-vis vest and think they were ''instantly bombproof''.

''It's about looking at the jobs to be done and making sure they can be done safely before you get started on them.

''If I can keep just one family together, because someone thinks twice about where they take the quad bike or heading back out to get a job done when they are exhausted, then my story has served a really important purpose,'' she said.

WorkSafe's engagement lead for agriculture, Al McCone, said it was an important time of the year for Miss Bremner's book to be launched, when school holidays and the Christmas break would have more children out on the farm.

Three children died on New Zealand farms this year and agriculture continued to have a ''tragic record'' for fatalities, that needed to be turned around, Mr McCone said.

''We're encouraging farmers to make sensible decisions and be aware of the risks on the farm and Harriet's story is one way that families can connect with these actions,'' he said.

Miss Bremner said Poppy was a very popular subject and the children whom she taught loved the little dog ''hanging out'' in the classroom at Amuri Area School.

Dachshunds were an unusual choice of farm pet but Miss Bremner's grandmother had a standard-size dachshund and she got hooked on the breed when she lived with her during her teaching training.

When her and Mr Hayman's Jack Russell terrier died prematurely, they did not want to replace him with the same breed and then compare them, so she brought home Poppy.

Miss Bremner has since returned to North Canterbury, to be closer to her parents, and has bought a property where she lives with Poppy and her two horses.

She had several drafts already for future children's books and, at this stage, she was self-publishing.

The books were illustrated by Dana Johnston, who lives in the Hakataramea Valley and who had an ''amazing ability'' to put on paper what Miss Bremner visualised.