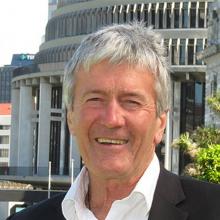 Farmers had just two years’ respite from the last three-year drought, before the latest round of dry conditions struck last year, prompting Mr Henderson to ponder whether a rethink was needed.

"ECan (Environment Canterbury) is looking at it as this is becoming a very regular event, so we need to consider do we need a longer-term strategy?

"It’s no longer the exception to the norm. Potentially, it’s too early to look at solutions, but we need to be looking at how often these things can happen."

Different areas had different experiences, with Banks Peninsula being unusually dry this season, whereas dry seasons were more common in the Hurunui district, Mr Henderson said.

"Responding to droughts every year is putting a Band-Aid on the issue, so maybe we need to be looking at whether there are opportunities for more sustainable landuse.

"But it’s also important that we don’t get too swept up in what is the latest phase."

Finding solutions to making farms more sustainable in the face of ongoing drought was not simply about utilising the best science and agronomy, Mr Henderson said.

"If we swamp the market with a new product which we can’t sell then we just create more problems for farmers."

Growing hemp and other plant-based food and fibre was an option, but farmers needed more support and Mr Henderson wondered if the existing levy-funded organisations, such as DairyNZ, Beef + Lamb New Zealand and the Foundation for Arable Research, provided the best coverage.

"Our levy groups are good at doing research for their own sectors, but arguably those farmers could benefit from research into other areas.

"It takes a lot of learning to become a dairy farmer, so if you add in other aspects to your operation it becomes a challenge."

But there were benefits for farms having more diversity in their operation, providing a variety of income sources, he said.

The Oxford dairy farmer believed some of his colleagues were open to the idea of converting to producing plant-based protein.

"I’m a farmer, but I don’t have to be milking cows. If you can find me a better option which has less impact on the environment, I will look at it.

"But the success of things like kiwifruit and sheep milk has come from it being a select market, so if you swamp the market, are you going to be able to get the same returns?

"So I think we will have animal farming in this country for a while yet."

Mr Henderson’s focus would now be on the work of the Waimakariri Landcare Group which was investigating ways of farming more sustainably.