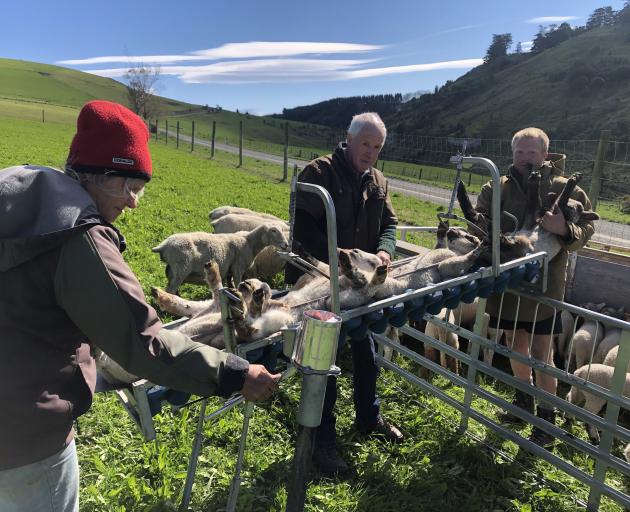 Jenny and Mark Chamberlain help son Simon tail lambs on his Hazelburn farm, a few minutes’ drive from their own farm at Totara Valley.PHOTO: GEORGE CLARK
Innovation has been key to successful lambing in a dry season, one South Canterbury farmer says.

Mark and Jenny Chamberlain farm 430ha with 70% sheep and 30% beef at Totara Valley — about 20km inland from Pleasant Point — with their son, Simon.

Mr Chamberlain said while this year’s rainfall might have been as low as he had ever seen it, his farm did not reflect that.

"We stayed green and got through, but it has been very dry," he said.

"We are always ready for a dry spell."

He started setting up for lambing around autumn, getting the ewes in the right condition in order to take the ram well.

Farming without irrigation, the couple always kept "dry" in mind.

To counteract dry conditions, Mr Chamberlain used high-energy feed as far back as April, building the ewes up through baleage and barley.

"It had been pretty dry but we set ourselves up well for lambing with plenty of feed and [are] over halfway through now, doing well.

"Just need some more rain through until Christmas and we will be right."

"Currently the region is dry to very dry for the time of year, but it does not yet classify as a drought," Mr Noll said.

"We are predicting near or below normal rainfall across the east of the South Island for August-October, so it does not exactly bode well for beneficial rainfall chances.

"We are keeping a close watch on this part of the country as we head towards the warmer time of the year.”

Down 12% in pregnancy scanning from the year before, Mr Chamberlain was sure their lambing percentage would be much lower if they did not do anything to intervene and support stock earlier.

He set the farm up for winter through both feeding their sheep and keeping them off the pasture a little bit more, to build up feed covers.

"We use winter feed crops. The more grass you have going into the winter, the more you have coming out."

The Chamberlains have a higher cattle ratio than they used to, changing from 90% sheep and 10% cattle in recent years to a 70/30 mix.

This meant less pressure for feed at lambing time.

"When we were 90% sheep, the whole farm was covered in breeding ewes, all lambing at the same time, which was a high demand on the feet.

"Now we have more cattle and can grow crops to hold them longer, keeping sheep in a smaller area so we have more room during lambing.”

"We are hoping for a good spring from now until Christmas and have full faith that farmers around the area should be in good shape,” Mr Grant said.

"If they could, people have been prepared.

"Fortunately it has not been classified as a drought or as bad a dry season as that from the 1980s.”