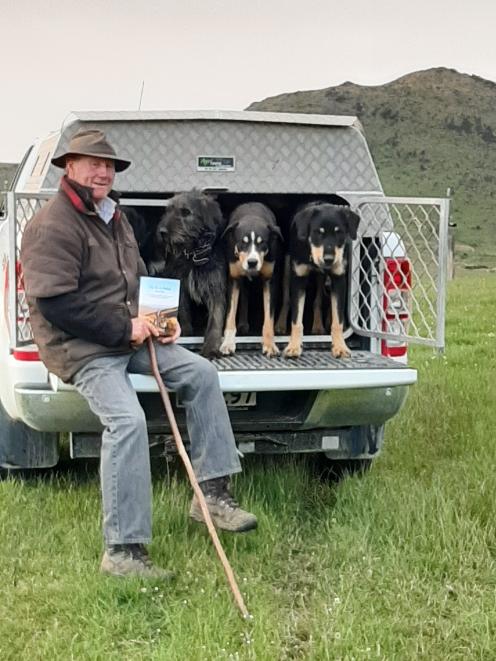 Lloyd has used the book as a tool to complement his training days and DVD since 2005, and he said the time had come to release an updated version.

‘‘There have been several adjustments made to my dog-training programmes,’’ he said.

‘‘Another 15 years of hands-on experience also brings a better understanding of other aspects that influence the trainer — dog relationship and the end result.’’

Pup Pen to Paddock, second edition, not only details the training programmes for both heading and huntaway dogs but also highlights the importance of the trainer’s approach.

‘‘The realisation that the trainer, more so than the dog, are the determining factor for success.’’

Lloyd said sharing what he had learnt about dog training with others gave him a lot of satisfaction.

‘‘Back when I first started out as a young shepherd, dog training wasn’t what it is now, and those that did know a thing or two weren’t willing to share their secrets. It was a matter of trial and error and I just worked away at it until I found a bit of a pattern to follow. I seemed to get an all right dog out of it. I probably buggered a few too.’’

The second edition, which Lloyd has self-published, took about six months to complete and he was glad it to have it hot off the press ‘‘just in time for Christmas’’.

How-to books, he agreed, were ‘‘a bit of a dying art’’ but he said his first edition still attracted steady orders and sold well at training days.

‘‘There’s still a need there, so I thought I might as well give it another crack.’’

Lloyd said his wife, Linda, did a lot of the work behind the scenes administering sales and distribution and daughter Carla helped with marketing and typesetting the book from Lloyd’s handwritten notes.

Lloyd said his passion for sharing his knowledge with others was reinforced when he saw an improvement from those who had taken his advice.

‘‘Particularly in the younger generation, to see a young shepherd 12 months later at a dog trial and they have got their dogs going well — it’s hugely satisfying,’’ he said.

‘‘Personalities and pertinent points that influence the overall result ...

Over the years priorities change and the focus sometimes shifts as one gets older, long ago I gave up on ever being rich. Shepherding is not a good option if your focus is on making money. After family and friends I believe the two most important credentials any person can have is credibility and respect. They don’t come by right, they have to be earned and they are something that money can’t buy. My advice to young folk starting their chosen career, in whatever vocation, would be to focus on being credible and earn the respect of those around them. This includes many other virtues that are all important to achieve the right result e.g. honesty, patience and integrity.’’

Southern Rural Life has two copies of  Pup Pen to Paddock, second edition, to give away.
To go in the draw, answer the following question:

When training a sheep dog, what does Lloyd say is a determining factor for success?

Email your name, address and answer to alice.scott@alliedpress.co.nz.