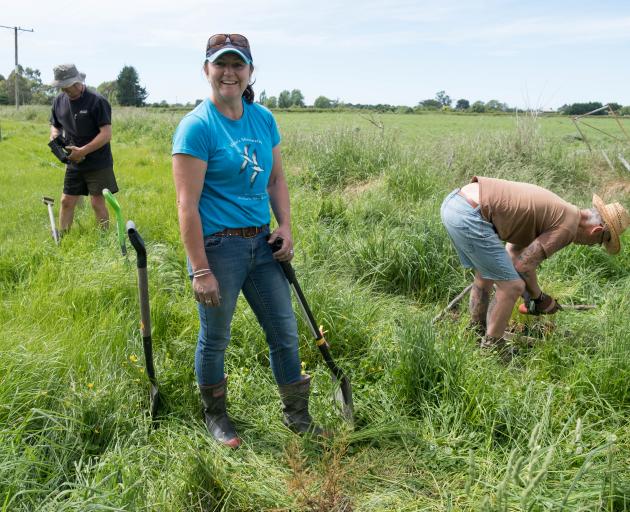 Kaikoura Plains Recovery Project manager Jodie Hoggard helps out at a farmer-led planting day on the Mackles’ farm, Maghera, recently. This site is one of a number of overland flow-path projects on the Mackle farm under way. Photo: Supplied
A decision to fund ‘‘pre-audit checks’’ instead of another farm workshop has paid dividends for farmers in the Kaikoura Plains Recovery Project.

Project manager Jodie Hoggard said the initiative, which was part of ‘‘the farming in wet conditions and irrigation efficiency workstream’’, was offered instead of the final workshop.

David Lucock, from Agribusiness Group, was engaged to offer the type of audit required for Environment Canterbury’s farm environment plan for the 21 dairy farms on the Kaikoura plains.

‘‘We offered our dairy guys a dummy run with an ECan-approved auditor regardless of whether they need a consent,’’ Mrs Hoggard said.

‘‘We have given people the opportunity to sit with somebody who knows the process inside and out, who can give them an idea of where they can improve.

‘‘A lot of our workstreams are very specific, but this was a good opportunity for them to look at all aspects of their farm across the board.’’

Each of the farmers who participated have received a report giving them an idea of how they fared and identifying possible improvements.

Mrs Hoggard said the farmers who needed to get on with their consent had now had ‘‘a good test run, so they know what’s involved’’.

But farmers not requiring a consent at present could still benefit by identifying improvements and potential cost savings.

Kaikoura farmer Antonia Frost said the opportunity to have a pre-audit was a good idea.

‘‘It’s nice to know we’re on the right track. Having a fresh set of eyes to see the wee things that we thought about, but hadn’t got around to yet.’’

Mrs Hoggard said the project had six months to go before the final report was due in June to wrap up the earthquake recovery project.

Mr Lucock had noted that, overall, the farmers were ‘‘in a pretty good place’’ and making good progress, including on the environmental front, she said.

‘‘A lot of the farms around here are not heavily leveraged with high mortgages. On the whole most have got the balance right in terms of having a lifestyle and a viable farm.’’

She hoped to wrap up the project with a community day in April (including the drainage demonstration work), ahead of the June deadline, to spread the messages to the community after the 2016 earthquake, Mrs Hoggard said.