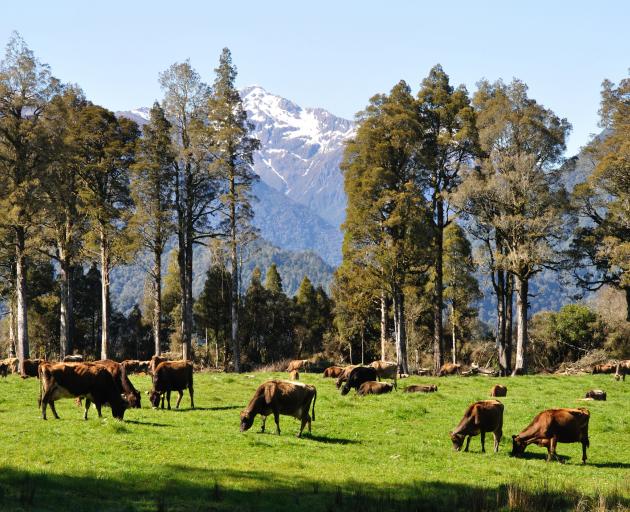 Jersey cows on pasture, West Coast, New Zealand. Photo: Getty Images
The West Coast Regional Council wants the Government to reconsider a swag of freshwater rules it says will not work for the Coast.

Some of the regulations designed to improve water quality will cost farmers, industry and the council a significant expense and have no effect whatsoever in a region with the cleanest rivers in the country, the council believes.

Staff hosted senior Government officials on the Coast for two days, in a bid to make clear the issues posed by the Essential Freshwater policy, planning and science manager Hadley Mills told the council meeting this week.

Despite that, four key parts of the final package remained especially problematic.

Two involved wetlands; one was the compulsory replanting of cropped and grazed areas by October 1 every year; and one involved stock exclusion on big river-run farms.

But while the regional plan allowed the refuelling of brush cutters and other machinery from a 20 litre fuel can on site, the Government's new rule did not.

"The environmental effects caused by having to move machinery in and out (to refuel) are likely to be greater than if the machinery can be refuelled within the wetland," Mr Mills reported.

Making farmers replant land used for intensive winter grazing by October 1 every year was another rule that would not work on the West Coast.

"Pasture growing conditions in October are much slower (than in northern regions) ...wet spring conditions also make getting machinery onto paddocks for resowing, difficult and potentially damaging to soil structure."

The council should ask the Government to extend the replanting date to November 1, as it had done for Otago and Southland, Mr Mills recommended. The stock exclusion regulations were also a concern.

Between now and July 2025, all cattle, deer and pigs must be kept out of rivers over 1m wide, with a 3m setback for fences.

"There are a large number of river run type farms, mostly in South Westland where compliance will be very difficult if not impossible."

The farms operated at low stocking rates, on a mix of private and public leasehold land in valleys with very wide river beds and highly variable flows.

"Water quality in these areas is typically very high and low stocking rate farming has been operating for generations with negligible impact."

The council agreed to raise the four problem rules with the Government — but added a fifth at the request of councillor and dairy farmer, Debra Magner.

The new requirement for landholders to install telemetry and report their water takes constantly to the council was a waste of time and resources, she said.

Speaking after the meeting, Cr Magner said she and many Coast farmers would be hard-pressed to comply.

"We have three bores and no cellphone reception. But we are somehow supposed to get telemetry systems installed and report our water take every 15 minutes, to the council."

Getting a satellite phone connection might be an option, but it was hard to see any point in the exercise, she said.

"We get 4m of rainfall a year, for goodness sake. This is absolutely stupid."

It seems the only problem with these water regulations is that it is going to cost the farmers.
Well... dip your hand in the pocket and pay the bill.
You've been freeloading and abusing the environment for generations. Fix the mess that you have made, accept that you are operating in a free market and that socializing your costs onto the rest of the community is no longer a viable option.

But you will see by reading the article Ird that West Coast farmers of which the above article only refers to are not the ones that are not causing any of the so called problems. Read and comprehend the article again and you be enlightened and see!

We already know that IRD, just like this government, doesn't actually know anything about farming. Hence the problem.

It was a West coaster who put the regulations together. He knows his people. And, the rural community throughout the country went and voted Labour party vote, overwhelmingly, and that was after the new Water Regs came into law. Seems the rural community does not share your doubts.

He might be a West coaster but he has shown he knows little about farming. "Rural community ... overwhelmingly voted labour". Well, certainly some did to keep the greens out but I haven't come across many who wanted Labour and few who see the new rules as being useful or workable.

Animal agriculture is the leading cause of species extinction, ocean dead zones, water pollution, and habitat destruction.
Livestock covers 45% of the earth’s total land.
A farm with 2,500 dairy cows produces the same amount of waste as a city of 411,000 people.
Livestock and their byproducts account for at least 32,000 million tons of carbon dioxide (CO2) per year, or 51% of all worldwide greenhouse gas emissions.
I think keeping animals out of river beds and reducing intensive crop feeding is the least they can do.