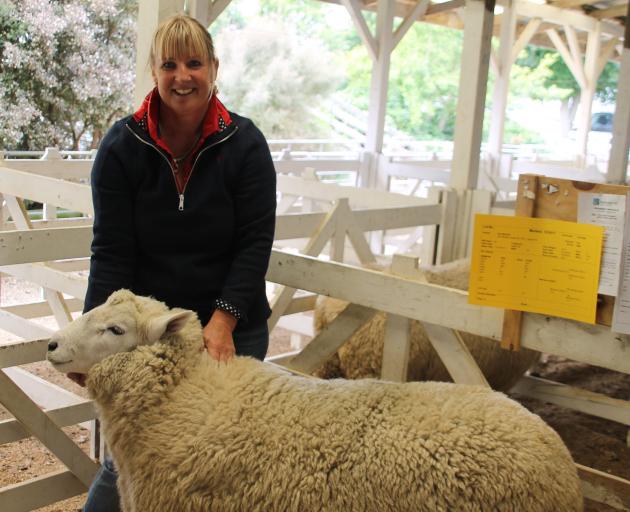 And it was that resilience that made the breed the ideal choice for the Wendon Valley property that she is busy developing.

They got into farming "from scratch" and Perendales were the obvious choice, as their toughness made them ideal for developing country.

"They withstand a lot more pressure. I thrash them," she said.

Last week, Ms Wilson topped the two-day Gore ram fair, selling a ram for $8200 to Andrew Laing, from Leeston and Adam Thacker, of Okains Bay. It was a successful sale as she also sold two other rams for $4000 and $3000.

Her Montana stud was registered in 2001 and before that, she ran it with her father.

Ms Wilson leases a 333ha property in the Wendon Valley and also grazes hoggets on her parents’ property at Mossburn. She will winter between about 2200 and 2300 ewes, including 600 stud ewes.

When she moved to the property five years ago, it was running 600 stock units. Once she had it fully developed, she hoped to be running 3000 ewes.

Each year, Ms Wilson sold between 100 and 150 rams to buyers throughout the South Island.

She had not entered rams in the Gore sale for about seven years, as it was a busy time of year for her.

But during a recent trip to the North Island, someone asked her if she was still selling rams and that made her think that people needed to see she was "still alive and kicking", she said, laughing.

Her sale rams were picked out by Carrfields agent Roger Keach,  who she praised. 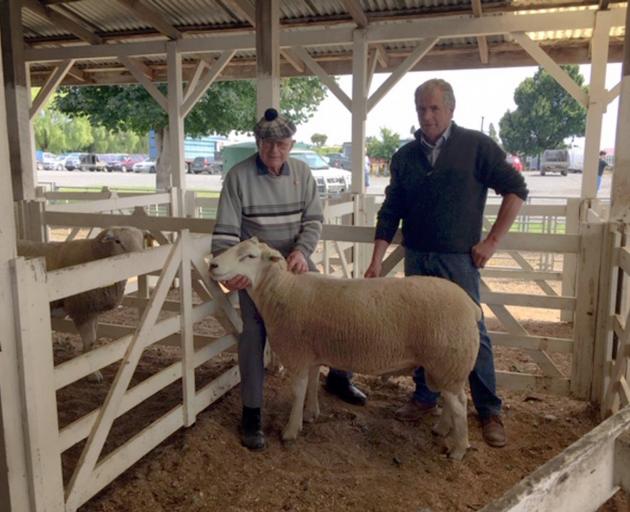 Vendor Peter Black (left) and buyer Garth Shaw, of Wharetoa Genetics, with the top-priced Texel ram. Photo: Supplied
"I just think he’s a legend. He’s an incredible stockman and has fantastic contacts. His knowledge is just so huge and his eye for stock."

He also knew what buyers were looking for, she said.

What she liked about her top-priced ram was that it was an extremely physically strong sheep, something that she believed some rams lacked.

When it came to what she was striving to breed, she was looking for a medium-size sheep — "definitely not the biggest" — with a "big barrel" and wider in the hips and narrower in the shoulder.

There were a lot of sheep "going the other way", being wider in the shoulder than the hips, which was not ideal for lambing, nor for the meat market. She was also after good fertility and early maturing lambs. 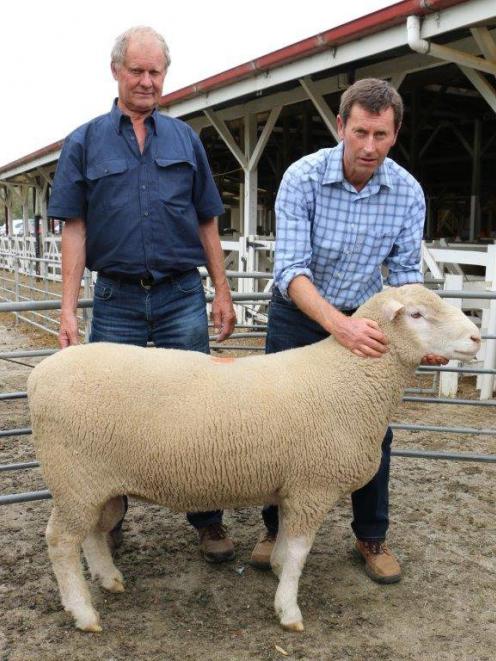 Speed McIlraith (left) from the Brooklands stud with the top-priced Poll Dorset ram, held by vendor Trevor Potter from Pukerau.

Topping the Gore sale was something that had been on her "bucket list" so she had now ticked that off.

Also on that list was winning a New Zealand or island dog trial championship which had so far eluded her.

She had not been trialling for a few years, although she did a bit of judging, and it was something that she missed.

Mr Keach said quality was very good at the ram fair and there was a reasonable bench of buyers on both days.

Mitchell Hillcrest Farming won the People’s Choice award in the Perendales, selling that ram for $6500, also to Mr Laing and Mr Thacker.

Blackdale Texels, from Riverton, sold a ram for $8000 to Wharetoa Genetics, and another at $6200 to Sam and Viki Holland (Culverden). Both sheep were bred from imported English semen.Waikaka Texels sold rams for $5000 and $4700. Geoff MacFarlane from Te Anau, sold a Hampshire ram to Ben Butterick of Canterbury for $7200.

Gilbert Timms (Palmerston North) sold the top priced Cheviot at $3400. Guy Letham from Ashburton topped the Dorset Downs at $5500 while Trevor and Doris McCall (Charlton) topped the South Suffolks, selling a ram for $3800.

In the Romneys, Paul and Kay Gardner, from Ashburton, got the top price of $3000.

Trevor Potter, from the Ohio Stud at Pukerau, topped the Poll Dorsets selling a ram for $5200. Mr Potter had a very strong sale, both stud and flock, selling another ram for $4500 and flock rams up to $2100. Alasdair Lindsay (Isla Bank) sold a Suffolk ram for $4000.