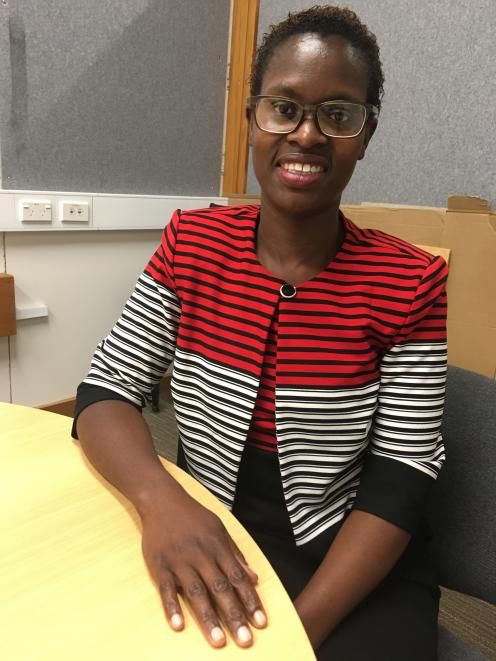 Anne Wekesa has been studying for a PhD in forestry science for the last three years at the University of Canterbury, researching the carbon life cycle of New Zealand harvested trees which remained in the domestic market.

“It used to be thought that when a tree was harvested the carbon entered the atmosphere, so in New Zealand the information has been lacking for how long carbon stays in wood products.

“I’m hoping my research will be used in developing policy in New Zealand, but it could be applicable in other countries, including Kenya.”

Wood products could be retaining walls, furniture, joinery, firewood or any product made out of wood.

Her work will complement a project by her thesis supervisor Prof Bruce Manley and his colleague Associate Prof David Evison, who tracked New Zealand timber exported to Asia.

“I’m trying to find out how much carbon is stored or held in wood products for logs manufactured in New Zealand and how much is held in end-use products.”

It was estimated 40% of logs were consumed in the domestic market, while around 60% were exported.

She had talked to sawmills, manufacturers and pulp plants, but found many of them had little idea where wood products went after being processed, so it had taken considerable research to track timber, Ms Wekesa said.

Her preliminary data suggested most domestically consumed New Zealand timber was used in products which had a long life, of perhaps 50 years, before being burned and the carbon released into the atmosphere.

She had spoken to international conferences in Brazil and the United States and was not aware of any other countries which had gathered this type of data to assist in planning to meet carbon recording targets.

“It seems like it’s just me doing it. People are doing it at a more aggregated level, but they don’t seem to have the data at a national level.”

Ms Wekesa is no stranger to New Zealand, having completed postgraduate study at the University of Canterbury School of Forestry between 2010 and 2012, surviving the earthquakes and the Christchurch snow events of 2011.

She said Kenyan forestry was mostly native, which was protected under conservation legislation.

“We have some plantation forestry, so I came here to learn about how it is managed in New Zealand and to learn the skills and technology which can be applied in Kenya.

“We do have radiata pine plantations, cypress and eucalyptus trees. They are exotics for us as well.”

When she completed her PhD, she was keen to do some postdoctorate study in New Zealand and pursue her work further to track the carbon life cycle of harvested timber, Ms Wekesa said.