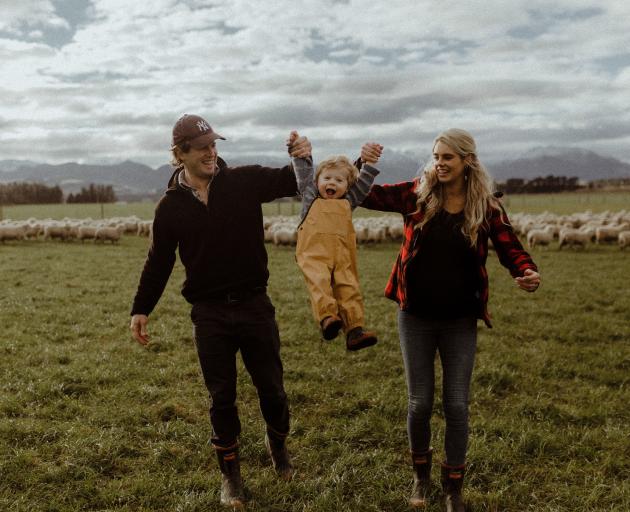 Angus and Elise Aitken with their son George. The couple have mapped out an impressive irrigation blueprint for Leebrook farm in North Canterbury’s Waiau. PHOTO: ELISE AITKEN

A young couple are in the early days of ambitious plans for an irrigated North Canterbury farm, writes Tim Cronshaw.

Angus Aitken admits he often needs to resist the temptation to experiment.

With a background in financial analysis, and a strong interest in technology, he finds himself gravitating towards innovation.

‘‘I’m guilty of that but I’m quite conscious of that as we have a business to run and we’ve got to make sure we’re profitable. We’ve gone through a development phase and this financial year is about showing what it can do. The experimentation is at a smaller level and trying to add value to the property and secure yield.’’

Since buying Leebrook farm in 2017, he and his wife, Elise, have immersed themselves in converting the sheep and beef operation unit into an irrigated grazing and crop growing operation.

That has had them buy two neighbouring blocks to pad out the farm to 550ha in Waiau and add two centre pivots to the existing one.

They have put in moisture meters, plan to introduce variable rate irrigation and have started a subsurface irrigation trial on nearly 20ha.

Drip tape in the ground is spaced to get water to the roots rather than the surface. The system is found in viticulture and overseas, but it is relatively new to mainland farming here.

‘‘Why are we doing this? Because it’s innovation,’’ he says. ‘‘We’re partnering with Carrfields to try something different and try to get this established in a market where we typically mainly know spray irrigation. It’s an interest of mine and it makes a lot of sense.’’

Mr Aitken says there are also water and power savings, and potentially fewer insects and fungicides to control.

Eventually applying liquid fertiliser to targeted areas through fertigation in the subsurface system, and centre pivots, will only make this more efficient, he says.

This thirst for getting the most out of irrigation, and their environmental stewardship, has made them one of three finalists for the Zimmatic Trailblazer Sustainable Irrigation Awards.

The 36-year-old was surprised to be named, because the operation remains in its infancy.

‘‘The time we’ve been here I feel we are scratching the surface, but have good intentions. When I look forward 10 years I have a vision of what this property will look like and what we will be doing. It’s a long pathway to get there, but we’ve started and it’s starting to come together.’’

When nominated, he spent a lot of time on the entry, spelling out their aspirations for the property.

‘‘I did a lot on how we’re going to sustainably farm it and protect the waterways and environment. I think that naturally comes to me because my Dad [Edward] was on the Ballance Farm Environment Awards panel and he’s been on the Banks Peninsula Conservation Trust and planting trees all his life, so it’s been instilled in me and comes pretty natural to do the same thing here.’’

Mr Aitken grew up on his parents’ 1200ha farm, Craigforth, in Banks Peninsula’s Pigeon Bay. On the breeding farm are about 270 Angus cows and 3800 Romney ewes.

After university, he took a degree in finance and accounting to London to become a junior analyst for an investment bank.

Returning to New Zealand, he worked for a major bank in agri-business for five years. Dealing with inspirational business owners, sparked an interest in agriculture.

In 2015, he became the fourth generation Aitken to run the farm business.

He saw the limitations of a hill country operation when dry spells arrived.

‘‘I wanted to mitigate that through irrigation so I put a case to the family to do that for this place. We’ve since pulled together three blocks as we needed some more scale to justify the distance between the two farms, but also make it a sustainable unit on its own.’’

Fertile soils range from free-draining to heavier silt loams under a clay pan. As long as irrigation is kept up they hold the moisture in summer, but they can get saturated in winter. That ruled out dairying for a flexible livestock system of more sheep and fewer cattle.

Over the past three or four years, he has found his passion leaning towards crop growing.

Sweet corn is produced for Talleys, peas for seed export, red clover for lamb finishing, short term ryegrass for the rotation to get stock on afterwards and a greenfeed like oat, rape or kale for lamb finishing in the autumn.

Corn is the best returning crop and 14ha will be increased to 80ha, with planting beginning in mid-November for harvesting in March and April.

At the moment, they are grazing 500 beef cattle — typically they carry 200 head — on short-term contracts which give them flexibility if the weather turns dry, or wet.

Eventually, more lamb trading will be carried so they can offload quicker.

This same flexibility explains why they’ve gone down the arable path, with 160ha now in short-term cash crops.

‘‘This land suits it, heavier soil, fertile and it suits the growing season with a growthy spring, lots of heat over summer and then it gets dry, and can get very wet in winter,’’ Mr Aitken says. ‘‘I’ve almost found my feet after four years with finding the system that works with the environment and weather we have here, and now with the water we have.’’

Part of their environmental work has been to slow down drainage on the heavier soils by putting in riparian and buffer strips, filters and sediment traps.

So far, 3ha of riparian planting has gone in for this purpose and to attract birdlife. Another 25ha has gone into pine forestry, with redwoods, on a riverbank where there was once only gorse and broom. About 150 poles were driven into a riverbank to stave off erosion.

Over the past two years they have been measuring input levels at the entry and exit points of drains and the test results are within Ecan’s limits.

‘‘We want to try and clean that water before it leaves,’’ he says. ‘‘If it does have nutrients in it, we do our best to slow that water down and stop floods and run-off.’’

Fertigation and other technology is on the wish list, as this will prevent over-fertilising of soils. In the meantime they avoid strip-grazing cattle over the winter on fodder crops like kale and fodder beet.

The few cattle kept over winter are block grazed on pasture and shifted often on to lighter ground.

The plan to move towards more trading involves buying animals from Craigforth at market rates and over the drought ewes and cattle were grazed with no favours given.

Mr Aitken runs that company, too, and each business has to stand commercially on its own.

The years of analysing financial accounts naturally led him to keep a tight check on monthly cash flows.

They have gone from a purchase and development phase and are now in the refinement phase for Leebrook, he says.

He accepts they will be judged later on their environmental, sustainable and farming performance.

‘‘We can say whatever we like in our papers and audits, but it’s got to be seen on farm and in practice. I think this award is humbling but time will tell if we can walk that walk too. You can say what you like about your plans and intentions but we actually have to prove it.’’ 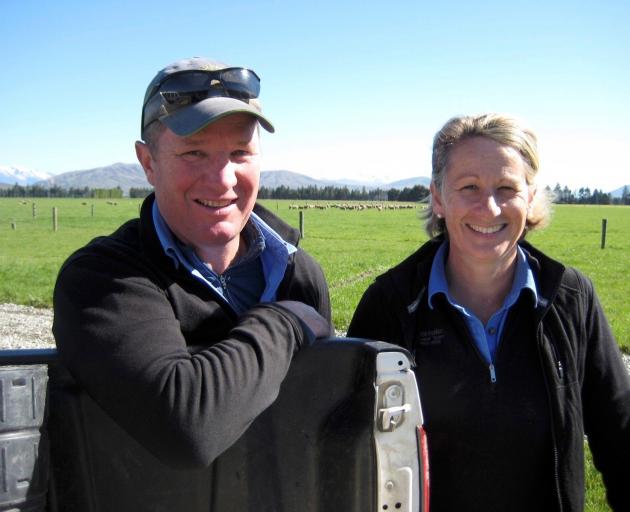 The other finalists in the Zimmatic irrigation awards are Richard and Annabelle Subtil, who run a fine wool sheep and beef breeding and fattening operation on Omarama Station, a 12,000ha high country property in North Otago, and Simon and Lou White from Hawke’s Bay.

The competition aimed to celebrate excellence in sustainable irrigation and encourage farmers to share ideas for achieving sustainable freshwater management.

For the Subtils, sustainable irrigation management was about implementing a development that increases productivity and profit, without having detrimental downstream effects on local water quality. Environmental stewardship and community involvement were always a priority.

The couple were involved in a variety of water-related projects both on the station and in the community including working with local iwi on native eel protection in the Omarama Stream, partnering with the local school to plant natives, working with the Department of Conservation and Environment Canterbury to protect native fish in a freshwater spring downstream from the farm, and establishing a catchment group that has held information events to promote excellence in irrigation and preserve the wider social licence of irrigators in the community.

On-farm judging will be held in November before the supreme winner is announced later the same month.