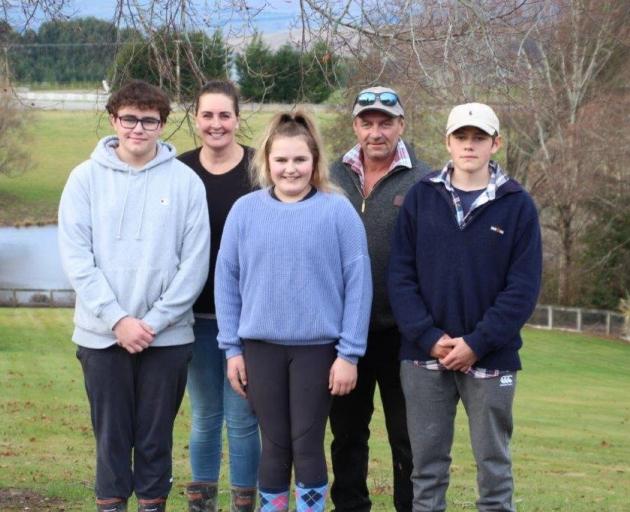 A WoolNZ carpet made of wool from the Brenssell family farm has been named after their property, Fernvale, at Moa Flat. They are Angela and Lloyd Brenssell with their children (from left) Harvey (17), Amy (14) and George (16). PHOTO: SUPPLIED
For more than 20 years, drastically low crossbred wool prices have dropped the wool industry on the carpet.

Wools of New Zealand (WNZ) is helping to change that. Now it is making carpet.

Thousands more New Zealand homes will be carpeted in wool following the agreement.

It will be manufactured in Turkey, and will be the first grower-owned New Zealand carpet brand to have grown its own wool fibre and to supply a finished product to the New Zealand market.

The 70oz cut pile range is named after one shareholder’s family farm, Fernvale, owned by the Brenssells, of Moa Flat in West Otago.

WNZ grower liaison Bridget Russell is the sister of Lloyd Brenssell, who farms the 9979ha property.

it could not have come at a better time for the industry as strong wool prices were only $2-$3 a kilogram, and falling.

Mr Brenssell is one of 730 grower shareholders contributing about 14.5million kilograms of annual strong wool production. They will effectively be selling carpet straight to the public through 100-plus outlets.

What had happened to strong wool had been ‘‘a tragedy’’, the fourth generation farmer and owner of Fernvale Genetics, said.

And while a hard luck story had become a good news story, it also reinforced his personal belief that farmers had to take partial responsibility for what had happened to the industry, and the bad rap as a result.

Inferior blends manufactured overseas had produced a ‘‘cheap and nasty’’ product that had done the strong wool industry no favours in the past decade, he said.

The Brenssells had put down one of those carpets in their family home five years ago. It had already faded and pilled and they would look at a complete replacement with the new brand, Mr Brenssell said.

In the business sense, farmers had also kept going with a model that had been long broken.

‘‘Cross-breeders are as much to blame for the situation because they stood by and let the model happen. It’s time to wake up, and stop the blame.’’

Mr McWhirter joined WNZ in January 2020 and, before that, led nationwide butcher Hellers through a solid expansion and export growth.

‘‘And now what we’re seeing is the fruits of those labours,’’ Mr Brenssell said.

A deal with Fletcher Living Homes had been the eureka moment when WNZ beat a synthetic producer to the tender.

WNZ had not been without some false starts, but those had given the company the courage and experience to test the model and to promote the brand and educate people.

‘‘I think it’s revealed many things about people’s ignorance regarding wool. Look at the world we’re living in now. People think you have to slaughter an animal to get the wool.’’

Being able to produce a carpet reinforced wool as not only a carbon-neutral but carbon positive product.

It was yarn the merino industry had been spinning for years, but not the crossbred community, he said.

‘‘Merino had done it far better than us, and what can we take out of this? I think we can lower micron level [to make an even finer wool] and still retain the quality and yield and have a better product.’’

It was what he had been doing with his selective breeding programme at Fernvale for decades.

‘‘What we’re seeing is farmers changing the model, and forcing change.

‘‘We’re taking ownership of the problem, that it’s not someone else’s fault. We’re seeing that already and it’s great.

‘‘It’s letting the industry know there is another way of doing things, that you don’t have to accept the status quo.’’

About 2,100 farmers will vote in November on a proposed merger between Wools of New Zealand and Primary Wool Co-operative.

Ahead of the vote, Primary Wool Co-operative will become the 100% owner of CP Wool with the purchase of Carrfields Ltd’s 50% shareholding. Carrfields Ltd will turn its focus onto the specialist manufacturing of wool and hemp products through its majority ownership of the NZ Natural Fibres business alongside Hemp New Zealand and the other minority shareholders.

Wool growers will be able to find out more via a nationwide road-show beginning in early August.