At last, a chance for some productive fishing on the Taieri’s upper reaches 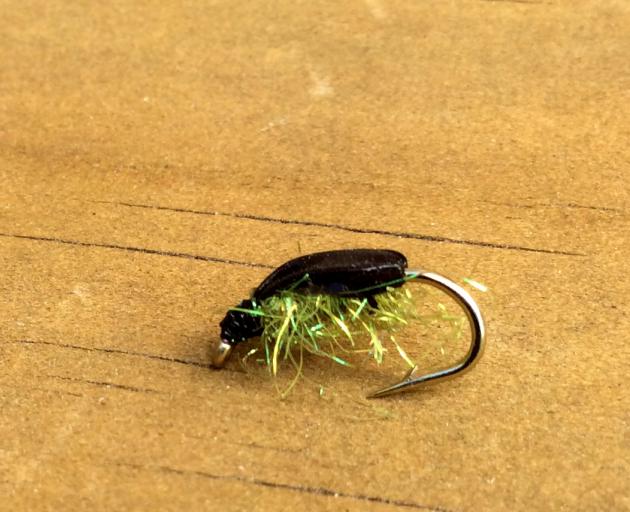 A diving beetle imitation. Photo: Mike Weddell
Now is the summer of discontent, to paraphrase somebody who probably was not even an angler. Even though most waters were fishable last weekend the wind blew and created havoc.

We have had rain to excess, late snow and then gales — surely there is nothing else that nature can throw at us.

All waters are dropping at the moment and there should be some that are fishable this weekend. The Mataura and Taieri look to be the best options so far, along with lakes and dams. If we get some warmth, cicadas on the tussock lakes will not be far away and these waters are worth fishing even before the cicadas appear.

Last weekend, I at last got chance to fish a river, the Taieri in the upper reaches. It was a little above ideal level but more importantly, was quite clear. Started by walking downstream so I could fish back up to the car. On the way down I had quick look at an oxbow which was completely covered with weed so was impossible to fish.

Further down there was another backwater which barely had enough water to hold fish but being full of optimism, I began fishing blind with a diving beetle imitation, as it shows up well in misty water, which was slightly discoloured by wave action stirring up the silt. I eventually hooked and landed a nice fish.

As the sun got higher, it made visibility better and I spotted a fish cruising around. After a few tries I got the fly in the right place at the right time and landed another nice fish.

Having exhausted the possibilities of the oxbow I started to fish back upstream. By now it was rather windy so I fished the diving beetle on a short line close to the near bank and within the first 20 metres was into a good fish which made a dash for the far bank and smashed off. Not far below the car, I spotted a fish close in and it took first cast. I managed to land this one and duly returned it.

Coincidentally, over the last few weeks I have several fly fishers ask me about diving beetles. Diving beetles vary in colour and size from all black to all green and from less than a centimetre to almost two centimetres long. As you may have guessed by the name, they dive, are good swimmers and can also fly. They are frequently present in trouts’ stomachs in the summer months.

They are a good insect to imitate as they drop almost vertically into the water, making a splash then swim rapidly to gain cover from predators.

The imitation I use is a variation of one Monty Wright showed me a few years ago and which has produced a lot of fish in the intervening years. Cast the imitation so that it makes a splash when it enters the water then use an erratic retrieve. It works well casting at sighted fish or as an exploring fly.