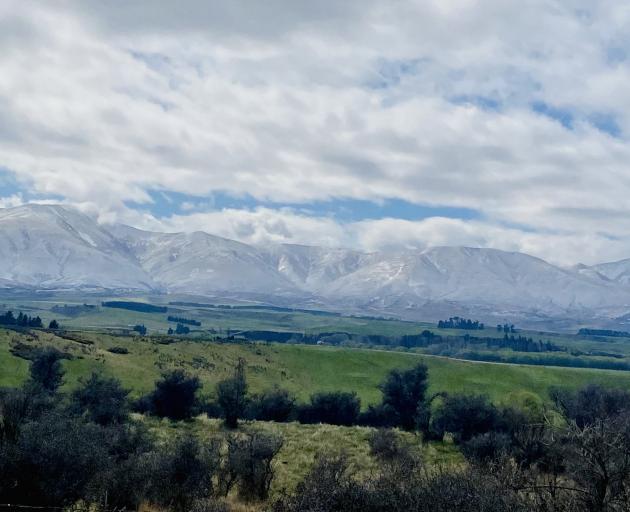 The skiff of snow around the Ida Ranges last week was not as bad as it could have been for farmer Charles Crutchley, who decided to push his lambing date out by two weeks this year. PHOTO: ALICE SCOTT
For the untrained eye, snow down to the foothills of the Kakanui Ranges will invoke notions of splendour and beauty, but for those who rely on those hills, and hills like it, snow at this time of year is not a welcome sight.

Charles and Natasha Crutchley manage Shortland Station, which takes in the flats of Kyeburn and the mountains of the Kakanui Ranges. The irrigated flats of the property start at 600m above sea level and their 7500 breeding ewes are set stocked on blocks that only go up from there.

After a few years of getting snow during lambing time Mr Crutchley made the call this year to delay putting his ram out by two weeks. “We usually start lambing around September 22 but this year we won’t start until the first week of October. We got three snowstorms last year during lambing and we would have been caught in this one, too.”

September lambing is not a system Mr Crutchley has always been set on.

“When Dad ran halfbreds we lambed later. I have since moved to a Romdale lamb that can get up on its feet quicker and we can lamb a bit earlier. We were chasing that earlier market premium but this year I decided for the sake of a few hundred lambs that we might get away, it wasn’t worth the knock the stock can take.”

The later lambing date also means there is a bit more feed around for the ewes to milk on.

“It’s really starting to come away. This year’s lambing should go well. The chance of snow is still there but every week the likelihood gets a little lower.”

Mr Crutchley said despite the snowstorms last year, he still had a reasonable lambing percentage.

“It’s a touchy subject because there’s some that think farmers should be lambing on lush grass paddocks and sunshine but the reality isn’t like that. Despite the weather, lambs are tough little buggers, and while it’s definitely not ideal, they do survive through some pretty harsh conditions.”