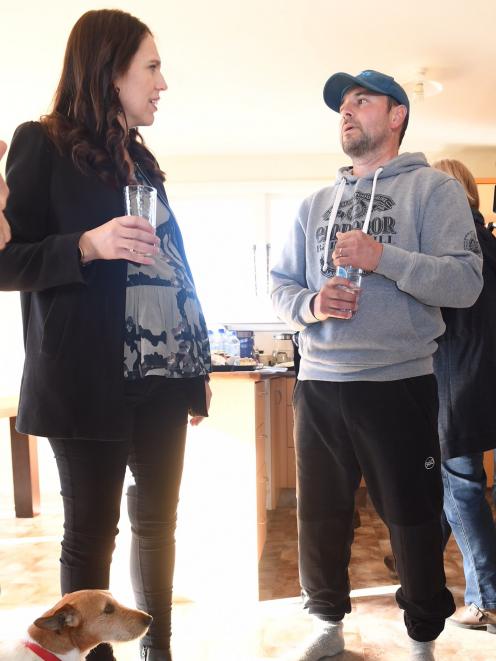 Prime Minister Jacinda Ardern meets Morven sharemilker Leo Bensegues in May last year. Mr Bensegues and his wife, Maite, were one of the first to have their herd culled because of Mycoplasma bovis. Photo: Stephen Jaquiery
Federated Farmers Otago president Simon Davies has welcomed a planned University of Otago study on the human impact of Mycoplasma bovis on farmers and their communities in Otago and Southland.

At the human level, some Otago farmers and their families at infected farms had taken a ''massive strike'', and there could be serious long-term effects, including on business viability, in some parts of the country, he said.

Some people who had received ''notices of direction'' from MPI, but were later ultimately cleared of infection, had in some cases also experienced stressful disruption to normal farming activities over several months.

Federated Farmers North Otago dairy chairman Jared Ross said the planned research was ''very timely'' and ''any better understanding of the impacts would be very much welcome''.

Federated Farmers Southland dairy group chairman Hadleigh Germann said there was growing awareness of the importance of mental health in farming, and the planned research was ''going to be beneficial''.

Southland Rural Support Trust co-ordinator Lindsay Wright also supported the research and said that, given an event that was ''so big and affected a lot of people'', useful information would be gained.

The study will focus on the emotional, social and psychological impacts of Mycoplasma bovis on Southern farmers and farming communities.

Dr Fiona Doolan-Noble, a senior research fellow at the Otago department of general practice and rural health, is one of the co-ordinators of the two-year project.

The exotic disease spreads through cattle herds and last year the Government introduced a programme to attempt to eradicate the disease by culling infected cattle.

It is hoped that the study's results will help to inform the Government's management of the outbreak and add to the limited body of research, aiding decision-making in exotic disease responses.

Lindsay Purvis is one of the Otago Rural Support Trust's co-ordinators and also has a co-ordinating responsibility for MPI-funded welfare support over M.bovis in Otago.

He, too, welcomed the research, and had 46 potential cases on his books, mainly in North Otago, and the greater Oamaru area, at the peak of the disease, in October.

His impression was that the disease was coming under control, and in about 80% of the cases, no infection was later found, after checks and restrictions.

Dr Doolan-Noble, of the Otago department's rural health section, said the study would look at the impact of the eradication programme on farmers directly, and also the wider community.

For farmers, the loss of a herd was ''an emotional loss, a sensory loss and a financial loss until compensation is received and they can start building up their herd again''.

Studies from the 2001 foot-and-mouth outbreak in the UK showed the outbreak was ''not just an animal tragedy but also a human one''.

The foot-and-mouth outbreak was contained within seven months but Mycoplasma bovis was more difficult to control and might take years to eradicate, she said.