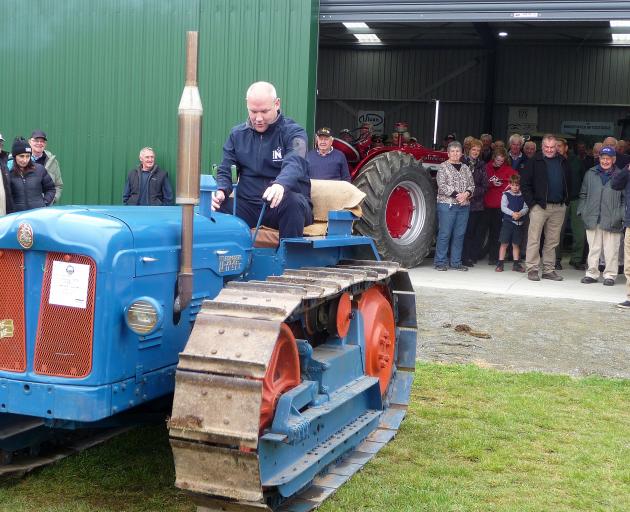 Rangitata MP Andrew Falloon tries out a Fordson Major tractor similar to one his grandfather used when he farmed at Waimate, during the official opening of the Mid Canterbury Vintage Machinery Club. Photos: Mick Jensen
Hundreds of past and present members and invited guests of the Mid Canterbury Vintage Machinery Club gathered to officially open their club rooms, earlier this month, on site at the Ashburton A&P Showgrounds.

It was a celebration a long time in the making but one which has exceeded club members' expectations.

President John Stewart and past president John Hall both spoke of strong bonds shown by the 110 club members to get the new building up and running. The final building was part of a long journey.

''Previous committees investigated sites at The Plains [in Tinwald] and South St [in Ashburton], but a suitable outcome couldn't be found,'' Mr Hall said.

''The Ashburton A&P Association were approached and they offered the club a site which would be suitable. As we are a farm machinery club, this site suits our aims and ideals.''

Mr Hall said to fund the expense of the building the display area was being hired out to agricultural firms for training people in servicing farm machinery and also for displaying new machinery to clients.

''The A&P grounds are ideal for these activities,'' he said. 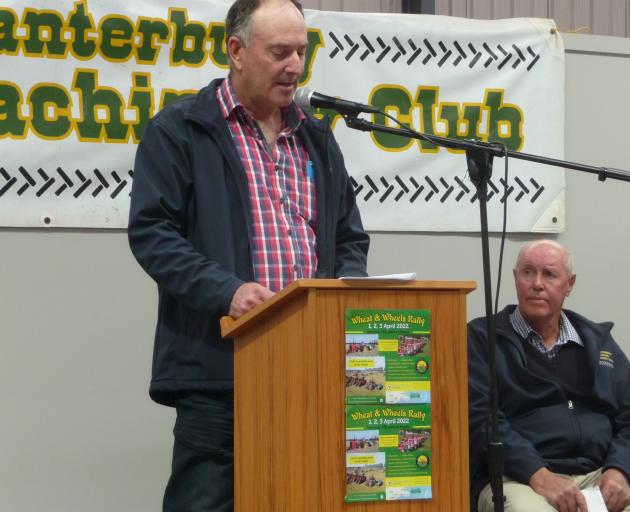 Mid Canterbury Vintage Machinery Club president John Stewart addresses the crowd at the club premises official opening, watched by past president John Hall.
Mr Hall said over the years there has been great support to complete the build debt-free.

Among those he thanked were club member Greg Donaldson for his time and commitment, and Phil Williams, of Structure Wise, for sticking with the group though many site changes along the way.

While the initial funds came from a bequest from the late Arthur Chisnall Estate, club members had ''grown it from there'' and also secured funding from The Lion Foundation, Mid and South Canterbury Trust and Rotary.

''I am sure you will all agree we have a fine building to go into the future,'' Mr Hall said.

''Thank you to all the committee members over the past few years for the support you have given. We look forward to many years of enjoyment at this site.''

Mr Stewart said club members encompassed people from all walks of life, with an interest in vintage and classic tractors and machinery.

He said there were classic trucks now at the club's events.

They held regular Tuesday morning cup of tea get-togethers at the clubrooms ''which is great for members to have a yarn and put the world to right'', he said.

There are also monthly meetings, on the first Wednesday of each month, which attract about 50 people. They are usually followed by a guest speaker.

Annual activities include the ploughing match at Wakanui (a qualifying match for the New Zealand final), dinners, tractor treks and bus trips visiting farms, businesses and vintage collections, around the Ashburton district and further afield.

There are also trips to similar clubs in the North Island, and a trip planned to visit farms and vintage collections in Victoria, Australia, next year.

Members also actively take part in community events such as Wheels Week Plus, the Ashburton Santa Parade, the Mayfield and Ashburton A&P Shows. And there are bi-monthly newsletters and Wheat and Wheels Rallies, the next one at the property of Anthony Hampton, at Lauriston, in April 2022.

Mr Stewart said the new venue at the showground was ''a great base to hold displays to support other users of the grounds such as the recent truck show raising money for child cancer and the South Island motorhome and caravan show held earlier in the year.''