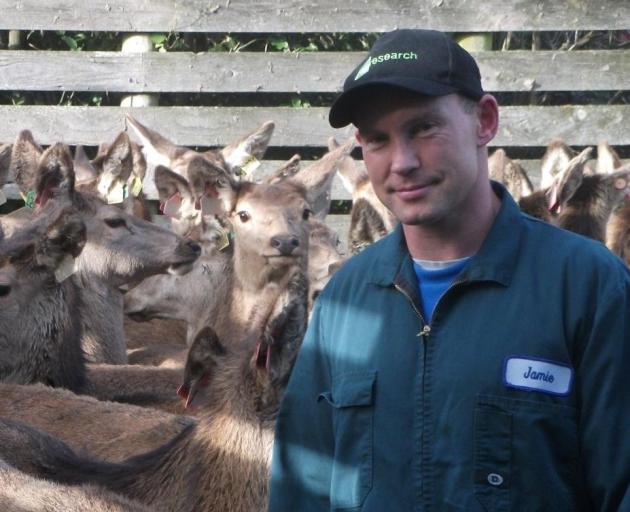 AgResearch farms system scientist Jamie Ward, of Invermay, recently completed new research on the usefulness of CarLA, or carbohydrate larval antigen levels, in deer. PHOTO: AGRESEARCH
CarLA can contribute millions of dollars to the deer industry, and is now officially a breeding value on DeerSelect after losing its "research" qualifier, a scientist says.

Although the CarLA test was first introduced to sheep farmers more than 10 years ago, the latest research focused on deer and showed animals with higher CarLA genetic merit generally had a faster weight gain as there was less of a parasite infection, and that meant an increase of between $2million and $8.6million total marginal value annually to the industry.

CarLA is produced by all ruminants, and generated by an animal’s ability to produce an antibody that helps protect it against internal parasites.

The antibody, which is measured by a saliva test, attacks the carbohydrate-based protective sheath around parasite larvae and makes it harder for them to establish in an animal’s gut.

The 32-week study used semen from six sires, including three with high CarLA levels and three with low levels.

They were mated to about 50 hinds each, and the 250 fawns were followed through to slaughter.

One of the key benefits, apart from improved growth rates, was the likelihood that farmers could reduce the amount of drench used over time with careful monitoring.

Stud breeder and drench and parasite researcher Dave Lawrence, who owns Tikana Wapiti Stud, said that by using high genetic merit CarLA breeding values as part of the decisions about selecting sires, farmers could work towards reducing their reliance on anthelmintics.

In the past, people had traditionally had to drench young deer in the autumn.

He now drenched deer every six weeks, rather than every four weeks, which also reduced the possibility of drench resistance.

"Although there are quite a raft of non-chemical tools for parasites for farmers to use, this one in particular is exciting."

Parasites and drench resistance were some of the biggest health challenges to deer on farms.

"If we breed for this we are not having to drench as much.

"If healthier animals reach target weight earlier we can get them to the chilled market with the higher premiums faster.

"There is more grass to feed something else if we don’t have those animals on farm anymore.

"We are always looking for outliers that have high CarLA as well as the other attributes."

Mr Lawrence has been involved in the development of a new drench family; the project is with the Agricultural Compounds and Veterinary Medicines Board to be considered for registration.