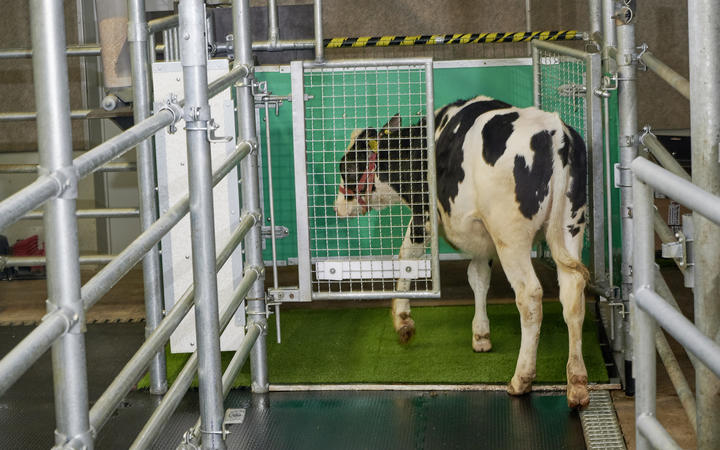 A calf enters the toilet. Photo: FBN
Researchers have found cows can be taught to use a toilet, which they say could help farmers reduce water contamination and greenhouse gas emissions.

University of Auckland-affiliated researchers, Lindsay Matthews and Douglas Elliffe, were involved training the cows on a farm operated by the Research Institute for Farm Animal Biology in Germany.

Lindsay Matthews said of the 16 calves in the programme, 11 had learned to urinate in a specific 'MooLoo' area within weeks, allowing nitrogen to be captured and dealt with before it polluted water or turned into nitrous oxide gas.

Matthews said the calves were put in the latrine pen, which was bright green to differentiate it from other pens, and rewarded them with food if they urinated there.

"This is how some people train their children - they put them on the toilet, wait for them to pee, then reward them if they do it," Matthews said.

"Turns out it works with calves too. In very short order, five or 10 urinations for some animals, they demonstrated they understood the connection between the desired behaviour and the reward by going to the feeder as soon as they started urinating." 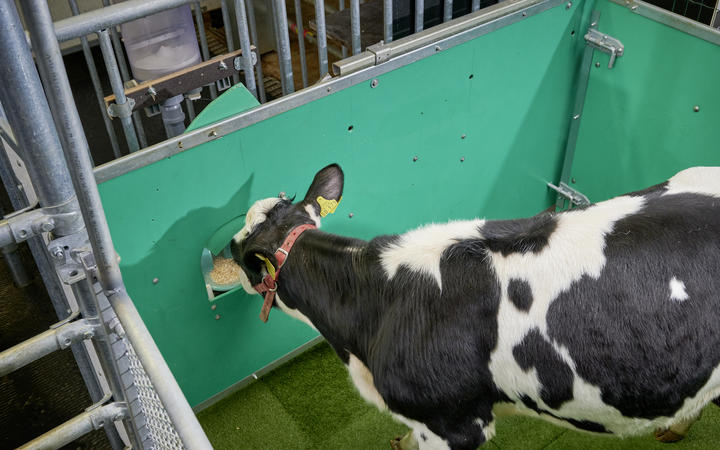 A calf gets its sugar water treat for using the toilet. Photo: FBN
The next progression was to increase the distance cows had to walk to the latrine. If "accidents" occurred in another part of the barn, scientists would squirt a little cold water at them.

"Very quickly, within 15 to 20 urinations on average, the cows would self-initiate entry to the toilet. This is very exciting because it means they were paying attention to their bladder getting fuller," Matthews said.

In Germany cows spend much of their time in barns, but Matthews said the next step was to look at how the system would work in the New Zealand context.

"So we've been in discussions with, you know, leading industry folk, and they are encouraged and, dare I say, excited about the prospects."

Elliffe said in New Zealand, were cows spend most of their time outdoors, toilet training would be more of a challenge.

However, cows do gather for milking and receiving supplements, so it may be possible for them to use a latrine at those times. Installing latrines outdoors may be another possibility, he said.

Elliffe added even if these changes resulted in a lower success rate, reducing urine patches would have significant environmental benefits.

"If we could collect 10 or 20 percent of urinations, it would be sufficient to reduce greenhouse gas emissions and nitrate leaching significantly," Elliffe said.

Another challenge would be to scale up so it was economically feasible to train millions of animals. This could be accomplished by using urination-detecting sensors and automatic reward systems. Trained cows could be transitioned into not expecting a food reward after every urination, the researchers said.

I always wonder if anyone has calculated how many ruminates there were in the past. I suspect there were far more than there are now. Presumably they didn't pee or poo.